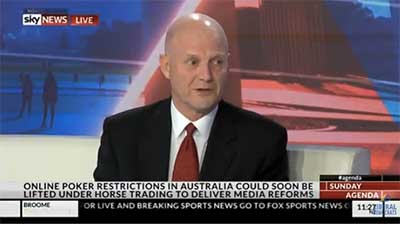 Senator David Leyonhjelm has revealed how he managed to secure a deal which could see the ban on online poker in Australia lifted.

The politician spearheading the campaign to the save online poker appeared on Sky News earlier this week to discuss a range of policies, including the new reforms known as the Interactive Gambling Amendment Act 2016.

Senator Leyonhjelm explained that online poker got caught up in the mission to prohibit in-play sports betting.

“So rather than regulating it, taxing it and watching it and all that, they think prohibition works.”

He explained that poker players can still play Texas Hold’em and Omaha at land-based casinos, as the reforms were created to target online gambling only.

While Senator Leyonhjelm, who has been vocal about exempting online poker from the new legislation, doesn’t play himself he believes the government has gone too far by banning a skill-based game which is not like poker machines.

So the Senator organised an inquiry, with recommendations set to be handed down on October 7.

A special hearing for the inquiry took place only days before the new reforms were passed, which the Senator discussed during the interview.

“All the evidence shows that even if you don’t like poker and online poker, sending it offshore, which is all you’re going to do if prohibition doesn’t achieve anything,” he said.

He explained that offshore sites which operate in a black market do not offer consumer protection, which is only harming the player.

“If the money disappears they have no recourse,” he said.

He also added that the players explained that they would much rather play at sites regulated by the Australian government which is not currently available to them.

“They [gambling researchers] also explained that there is no problem gambling associated with poker. It’s other types of gambling where the problems arise,” Senator Leyonhjelm said.

Since the Senate rushed the new reforms through instead of waiting for the recommendations to be handed down from the poker inquiry, the Senator was blindsided during the Senate debate and was unable to exclude the online game from the reforms.

However, he recently announced that the Communications Minister, Mitch Fifield, had written to him stating that he would be open to legalising online poker operators in Australia.

In the interview, Senator Leyonhjelm revealed that he was able to secure the deal provided he supported the recent media reforms, which passed the Senate on Thursday evening.

He revealed that many lawmakers began rethinking the ban when he said he would start making things difficult for them.

“So we got to that point on online poker, and they suddenly said ‘yeah when you think of it we can’t really think of a good reason why we did that’,” Senator Leyonhjelm said.

The Senator also revealed that even anti-gambling advocates don’t have a problem with the skill-based game, including Nick Xenophon.

Senator Xenophon is reportedly more concerned with poker machines since they cause high problem gambling rates.

“Nick seems to be aware of the fact you can play poker for very small stakes. You know how much you’re going to lose,” Senator Leyonhjelm said.

“It is pretty rare to get problem gambling associated with poker.”

Looking for an online poker site?