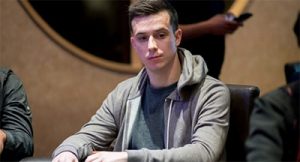 Another Australian has done exceptionally well at this year’s WSOP after James Obst won his first gold bracelet in the $10,000 Razz Championship.

Mr Lynskey, who resides in Brisbane Australia, was among the 1759 entrants of the $US2620 buy-in Marathon Event.

The unique event played out over five days and players received deep starting stacks, as well as 100-minute levels. Some days ran for up to 14 hours.

Then the flop came – a Q of Clubs, a 9 of Spades and a 6 of Diamonds – and Mr Lyknskey had a fighting chance with two 9s and two 6s. But when the turn presented a Q of Hearts, Mr Rojas ended up with a better two pair.

The river was 5 of Hearts and Mr Lynskey was eliminated in second place. He pocketed $US426,663.

Mr Rojas scored Venezuela’s first-ever bracelet and the first prize of $US690,469.

Mr Lynskey beat out seven other players at the official final table of nine including Maurice Hawkins (US) who came in ninth place, Pratik Ghatge (UK) in eighth place, Andrew Jernigan (US) in seventh, Faraz Jaka (US) in sixth, Julian Stuer (GERMANY) in fifth, Tim Reilly (US) in fourth and finally Jeffrey Tomlinson (US) in third place.

Mr Tomlinson fought hard for a position in the top two but came up short after his A-K lost to Mr Rojas’ pocket eights. Mr Tomlinson is no stranger to WSOP – he won a bracelet in 2015 in the $5000 8-max event.

Although Mr Lynskey did not take out first place, he did put up a good fight and he can attribute some of his skills to the online poker world.

Under the handle “lynskey99”, Mr Lynskey was a regular at PokerStars and PartyPoker online poker sites and has quite the résumé.

Finally, he was tabled at the PokerStars Sunday Warm-Up the following year where he secured $13,000.

While the Interactive Gambling Act (IGA) 2001 prohibits operators from supplying Australians with online gambling services – unless they’re locally licensed – the wording of the Act allowed many offshore poker sites, and secure online casinos, to operate in the Aussie market.

Many Australians, including the successful Mr Lynksey who has made a career out of playing poker, enjoyed the online pastime due to the vague wording of the IGA.

But the ambiguity surrounding the law has been clarified via the Interactive Gambling Amendment bill 2016. It threatens to end the careers of hundreds of professional and amateur online poker players.

Unfortunately, the bill has already pushed out a number of operators, including 888Poker. PokerStars announced it will withdraw when the law changes too.

There may be hope, though, with Senator David Leyhonjlem successfully gaining a committee inquiry into the nature of online poker.

He previously attempted to save online poker, and blackjack, by proposing a secondary amendment to the IGA bill. Unfortunately, he failed.

Whether he is successful or not will depend on the nature of the submissions and the reasoning to legislators.

Many of the lawmakers in charge of online poker’s fate have only recently been made aware that the game is based on skill, not luck.

Looking for an online poker site?

If you’re looking for an online poker site you can head to Ignition Poker or Intertops Poker to play cash games and tournaments.

For those after an online casino, we recommend players from United States head to BetOnline Casino for a secure gaming experience, which also offers a range of poker variants against the house.