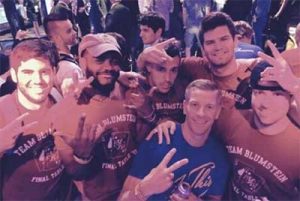 This year’s World Series of Poker (WSOP) Main Event winner has proven that it pays to support friends.

The 2017 champion, Scott Blumstein, won $USD8.5 million after he beat eight other players at the final table.

But he says he could not have done it without support from friends.

A number of his mates put in $60 each which contributed to the $10,000 entry fee. Although it didn’t make a huge dent, it was the thought that counts.

And that thought may have given the 25-year-old the motivation to win since he was a relatively unknown player prior to the tournament, playing mostly online poker.

“The truth is that a bunch of guys who had small stakes in me helped me the most at the end, when I needed support, when I needed to be driven places,” Mr Blumstein said.

“I can say pretty confidently that without their support, I might not have won it all.”

ESPN has revealed his friends, Peter Gerolamo, Aldo Boscia, John Scuteri, and Nick Muldrow each put in $60 and in return received $40,000 each by Mr Blumstein.

The group who helped celebrate his win weren’t the only investors, however.

“My dad sold a half a percent to the owner of a bagel shop,” Blumstein said.

Mr Blumstein wouldn’t reveal the exact amount of his stake sold before the tournament, but poker professional Asher Conniff said he bought 3 percent for $420. He made $244,500 as a result.

Mr Blumstein tweeted his friends and followers to back his bid prior to the event and while the tweet failed to gain traction, those who did support him made an excellent investment.

Mr Scuteri revealed the group had an Excel spreadsheet which would do the rounds each day Mr Blumstein survived.

Mr Boscia revealed the Main Event winner didn’t really need the $60 from his friends due to the other backers, and instead just wanted the support.

“He wanted us to sweat it out with him,” Mr Boscia said.

Once Mr Blumstein had made the final table he was guaranteed $1 million, which meant his supporters could afford to fly from Philadelphia to Vegas and cheer him on. The group also donned “TEAM BLUMSTEIN FINAL TABLE ’17” shirts.

Everyone in the room wanted a shirt as a deuce came on the river at the end of the final hand which won Mr Blumstein the tournament.

Mr Boscia said after the tournament that he was there for the camaraderie but added that the money is life-changing.

“I just have a normal 9-to-5 job. I have student loans. I can now make a down payment on a house,” he said.

To learn more about playing online poker, read our online poker guide. There are many online casinos offering multiple poker variants which are available to players from United States. We highly recommend BetOnline Casino as the safest and best online casino providing support for players from United States, with some popular poker games on offer which can be played for free in practice mode or for real money bets.