Microgaming Poker Network has $30,000 in cash prizes for August

This month will see the return of the popular Microgaming Poker Network (MPN) Cash Drop, with $30,000 in cash prizes to give away.

Every 5 minutes from August 4 until August 21, a random player on a real money cash table will be awarded $5 instantly, with $25,000 to be given away during the promotion.

In addition to the random cash drops, $5,000 will be divided for leaderboard prizes. Each time you receive a $5 cash drop, you’ll work you way up the leaderboard ranks. Finish on top of the leaderboard at the end of the promotion and be rewarded with an additional $500 cash prize.

Players will be notified of their win in the chat window. The $5 cash prize will be available for play as soon as it is credited to your account.

To get involved, sign up at BetOnline Casino and receive a $160 welcome bonus.

The MPN Cash Drop promotion is also available on mobile via the MPN mobile client, allowing you to play on-the-go on your iOS or Android smartphone or tablet.

The leaderboard cash prizes are as follows: 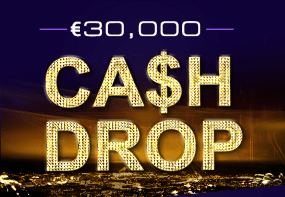