Never leaving us hanging between new game releases, Slots Million has added the sizzling ELK Studios pokies Electric Sam to its growing repertoire of over 910 games. Electric Sam is a game like no other, featuring a family of trolls acting as casino entrepreneurs deep within a mythical forest. 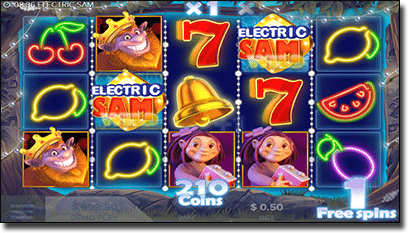 Sam, the troll king, collaborates with his wife Sandra and daughter Maggie to rig up some homemade electronics and attract the forest folk to gamble at their dazzling casino. It’s a bizarre theme that’s for sure, combining the animated trolls with traditional slot symbols like bells, cherries and lucky sevens, but the result is an eye catching, engaging game with a jackpot of 200,000 coins up for grabs.

Electric Sam is a five reel, 243 way pokies game and has many special features including sticky wilds, imploding wilds, free spins and multipliers. There aren’t any mini bonus games, but triggering free spins with the appearance of three or more liberty bells anywhere across a winning combination is your real key to winning big here.

It’s within the free spin rounds that the bonus wilds and multipliers can be triggered, giving you the chance to win up to a x10 multiplier on a maximum bet of $100, making Electric Sam potentially quite lucrative.

The electrical theme really adds to the visual appeal of this game, with symbols blazing to life in neon lights and flashing electronics lighting up the reels every time a winning combination is struck.

You can check out OnlineCasinoSite’s official review and verdict on Electric Sam for more detailed information on the game.

About Slots Million casino and ELK

One of things we love most about Slots Million is that you will find games here by software developers that you won’t find elsewhere, not just limited to the big guns like Microgaming and NetEnt but to smaller, up and coming game developers like ELK Studios.

ELK was founded in Stockholm in 2012 and has since come up with such vibrant online slot creations as The Lab, Taco Brothers and Champion’s Goal, which you’ll also find available to play for real money at Slots Million. ELK Studios’ main focus is on mobile gaming, so you’ll find Electric Sam available for flawless iOS and Android play at Slots Million’s mobile casino.

Electric Sam along with ELK Studio’s other pokies titles can be played for real money or for free play in demo mode. All Slots Million games operate directly via browser based play, so no downloads are required to enjoy these vibrant ELK slot games.

Where else can I play Electric Sam online pokies?

If you are from any region where Slots Million does not accept players, you will be happy to know you can still enjoy Elk Studios pokies and hundreds of other high quality real money casino games at the many other sites we review here. Bovada Casino is our #1 choice for readers visiting us from United States thanks to its generous sign up bonuses and free spin rewards you can redeem almost immediately after creating an account.