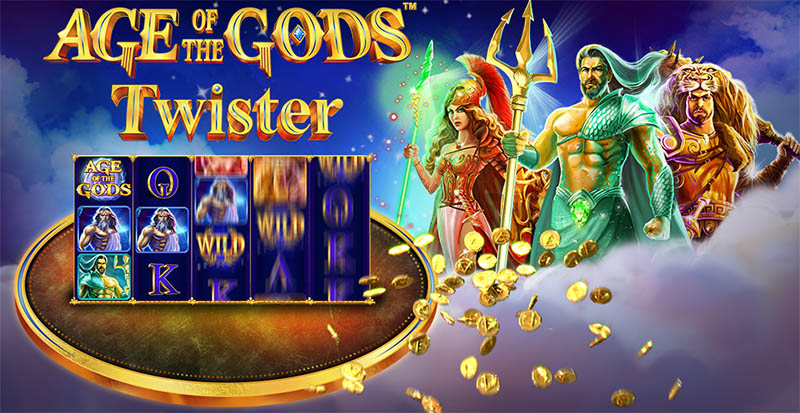 Playtech has incorporated its Age of the Gods series jackpots into the poker tables.

In what we believe is a first , the new Age of the Gods Twister Poker game will share liquidity with eight other games in the series, with each giving you a chance to trigger randomly the four tier progressive jackpot, which is regarded as one of the biggest in the industry.

Because the jackpots are not linked to the gameplay you can still trigger it when you play a losing round and the same goes for the main Twister jackpot.

The Twister jackpot is calculated by multiplying the game buy-in, and can balloon up to 100 times this amount, with it calculated at random.

The award winning software company’s latest release is a three player game, in which the winner takes the entire jackpot.

It could be described as a faster-paced format of poker, where each player has a starting stack of just five big blinds, which means every hand is action packed.

A small rake or percentage of your buy-in is taken and put towards the progressive jackpot pool, with the biggest prize, known as the Ultimate Power Jackpot, growing from a starting pool of €100,000.

Playtech’s strategy with this release

“We’re delighted to bring our hugely popular Age of the God brand to the world of Twister Poker,” Playtech COO Shimon Akad said.

“Our development team has done an exceptional job of recreating the look and feel of the series, combining striking graphics with compelling gameplay.

“Twister has proved to be a highly popular Poker variant, and we’re confident that fans of both the concept and the Age of the Gods™ brand will be very excited by the new game.”

Age of the Gods background

Age of the Gods has been around since 2012 and quickly gained popularity in both retail outlets and at online casinos as the slots games took hold.

In 2016 Playtech then launched an Age of the Gods Live Roulette game, with it becoming the first time a slots jackpot and roulette progressive have shared liquidity.

Playtech then took the line to Bingo with its release in March, titled Lord of Lightning, also proving to be a hit with players.

“The core principle of our Playtech ONE strategy is that players should enjoy the same excellent experience across all devices and channels,” Akad said.
“The expansion of the Age of the Gods suite takes this one step further, delivering the same excitement and high-quality visuals the series is known for in distinct games across all key verticals.

“Bringing the power of a leading slots brand to poker creates some excellent cross-sell opportunities that we know can be of tremendous value to our licensees.”