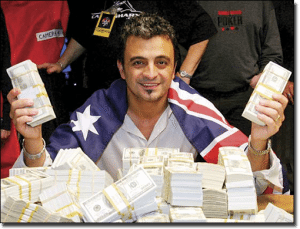 The Joe Hachem poker challenge came to a close at Melbourne’s Crown casino earlier this week, with Jarred Graham taking the main event glory and a six figure pay cheque.

After three long days of action the real battle for Graham had only just began when he entered heads up with Daniel Levy.

The well-known Levy held a significant chip lead over the WSOP Bracelet winner Graham, with 4.3M chips to Graham’s 2.8M, but this was not enough as Graham’s experience proved too much for Levy.

Graham went on to claim the top prize of AUD $101,175 and notch up another victory for the Hendon Mob.

Full Tilt online poker unveiled a new rewards program in late July known as the “Players Club”. Full Tilt Players Club members can look forward to earning new reward coins that can be used to buy themselves into tournaments and an all new mini-game “The Deal” where players have a chance to win a six figure pay cheque along with plenty of other prizes. After just 24 hours of play, Full Tilt, had already seen 483,203 hands played in the new fun mini-game and distributed 334,580 prizes.

‘All in for Charity’ to hit Etihad Stadium

On Thursday, August 27, Melbourne’s Etihad Stadium will play host to the All in for Charity poker event. The event was founded by two time ANZPT player of the year Tony Hachem and aims to raise funds for the organisation Save Our Sons, a group who raise awareness and to ultimately find a cure for Duchenne Muscular Dystrophy (DMD), which effects one in 3500 children. All in for Charity is quickly turning into a high profile event with many celebrities already coming on board.

The Treasury Casino Brisbane is set to host the Brisbane Poker championships in late October. This will be the first year in many the casino has decided to run a poker event to this size before. The tournament will be held over a four day event with two flights playing alternate days. The event is said to cater for 160 players with a $1500 entry fee, this is massive news for the local Brisbane players as the Treasury poker room has downgraded in recent years and talk has been to remove it entirely. Satellites for this event begin late September.

The Diamond Series is set to return to Poker SA bigger and better with six events being run over six days late October. The main event of this tournament will be event five, a $2400 buy in event, to fought out over two days of play. Poker SA would be looking to smash last year’s record of 77 players for the event and if the classic series they hosted earlier this year which saw 114 players hit the felt is any indication it’s going to be a great year for poker in Adelaide. The other event to watch will be event 6 the high roller event with a $3700 AUD buy in with a no re-buy structure, and last years record of 27 players should be broken.