Developed by Genesis Gaming and brought to us by Microgaming via their Quickfire platform, Savanna King has us nostalgic for the Lion King. With 1024 ways to win, across 5-reels 25 and paylines, we get to experience everything from Scatters, Wilds, to free spins and multipliers on this African-themed poker machine.

Featuring a plethora of African animals with the backdrop of a gorgeous Savanna, we are welcomed into the wilderness with the sound of tribal drums. The graphics on this video slot are animated on a win, and while Mufusa wasn’t very lucky when an animated stampede occurred, players will be with this pokies.

We recommend this slot for lovers of the Lion King or anything Jungle-themed.

This slot is available to play in instant mode, rather than having to download any software meaning players can instantly access it via an instant play casino. The best Internet casinos which we can recommend to play at is:

The above online casinos are considered to be the best available. All offers diverse, fair games with great payout rates; regularly update their catalogue and it prides themselves on ensuring players are safe when depositing real money. You can follow our links to access the games quickly and conveniently.

This pokies offers players the chance to win just off Scatter symbols. Every bet has a minimum of 40 cents to a maximum of $80 per spin, but be careful when upping your bet amount as the increments double in size every time you raise it. 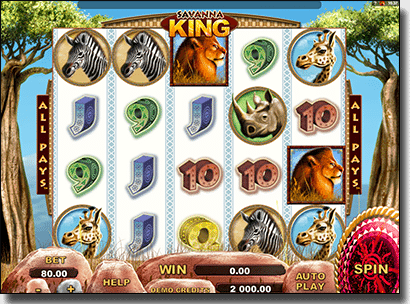 Scatter symbol: The Savanna King logo represents the Scatter can bring about some nice payouts. It can pay up to 800 coins if you land five symbols that are the same and works in conjunction with the Wild symbols, though the latter can’t replace the Scatters.

Wild symbols: Pluralising symbols wasn’t a typo as there are two Wilds available on the reels. The Wilds are represented by an icon which says Wild with a gold background. While they can only land on reels two, three, and four, they help create winning combinations meaning with two Wilds there’s even a bigger likelihood of winning, with multiple ways to win on one spin.

Whenever there is a win with the animals, don’t be so quick to keep spinning because the animations of the lions roaring, the giraffes poking their tongues out, the zebras nodding their heads, and the rhinoceroses snorting is actually quite captivating. The animation you are after however is the stampede of the antelope.

There isn’t a bonus feature in conjunction with the free spins, rather they are combined into one bonus round triggered by Scatters. But there are some nice additions to the bonus round which make hitting it worthwhile. 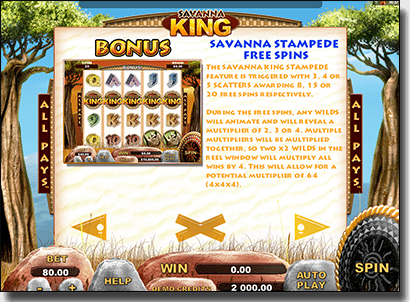 Multipliers: With the free spins round, the Wild symbols can turn into multipliers, which can amount to a total of 2x, 3x and 4x each. Since there are two Wilds they can multiply with each other too. Therefore, there is a chance you can win with 64x attached.

Pressing spin every bet, especially if you are planning to play for quite a while, can become very tedious. Savanna King solves that problem by including an Autoplay button which you can customise to your liking. You can set it to auto spin five, 10 or 25 times, and you can stop these spins from automatically occurring at any time.

Additionally, this slot has a 96% payout rate which can be found on the games payout table.

This new pokies which has been released via the Quickfire platform and presented by Microgaming means that although it was created by Genesis Gaming, which doesn’t quite have its name up there with Microgaming just yet, it was obviously approved by the online gaming giants.

The graphics are incredible, and with so many ways to win with the option to autoplay, we have taken a liking to this slot. It has a great payout rate and the added Wilds boost each spin. Overall this is a good game worth checking out.