Take up All Slot’s Casino Challenge to win Free Spins 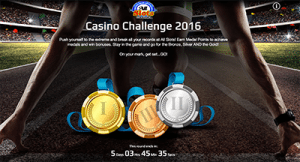 ALL Slots Casino is celebrating the 2016 Rio Olympics with its own games that are sure to rile up your competitive urges.

Running until August 21, the Casino Challenge 2016 prompts players to battle for Bronze, Silver and Gold in the ultimate test of loyalty, with every loyalty point earned at the casino helping players move up the medal ranks towards gold.

You’ll earn a Medal Point for each loyalty point, with Medal Points Boosts also up for grabs to help you really shoot up the ranks. If you’re living in United States bonus points are available by signing up and opting in at BetOnline Casino. Visit the “My Offers” area in the casino to find the promotion.

Once you reach a certain points threshold, you’ll be able to claim a medal! You can win all three medals in each round up until August 21.

You can win up to 3 bonuses during each round of the promotion, with bonuses credited every 15 minutes once you claim a medal.

The potential bonuses are as follows:

The final round is now live, and will run at the following times: