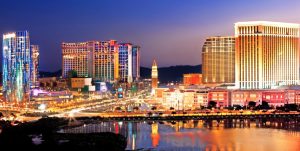 It’s been a big couple of weeks for Macau’s authorities, with multiple arrests made for various gambling related crimes.

On Wednesday, Macau’s Judiciary Police arrested 19 people under suspicion of running an illegal VIP gambling ring. The offenders, who were all from mainland China, were allegedly running an illicit VIP gambling room out of a hotel room in Macau, where they were reportedly scamming the Chinese high-rollers they lured to gamble there.

Reports from local publications said the hotel involved (which has not been named) was located within the busy NAPE district. The 19 arrested suspects were acting as security guards, dealers, VIP hosts, VIP room operators and posing as fellow gamblers. Four VIP gamblers were also on site at the time of the raid.

The raid was a result of a tip-off from a member of the public who filed a police report in June saying the hotel room was being used as an illegal gambling den, where the suspects were luring Chinese nationals from the mainland. It is believed at least five VIP gamblers fell for the scam and were in debt to the operators.

Police say the illegal gambling ring could have been running for as long as two years, and that the suspects were using card shufflers that had been modified to play in favour of the house.

The arrests come just a week after Macau’s Judiciary Police arrested another 15 individuals suspected to be participating in illegal loan-sharking. The suspects, who were from mainland China, were alleged to be part of a cartel that illegally loans money to gamblers in the Cotai casino district and then charges them excessively high interest rates. Police are still searching for the king-pin of the loan shark operation.

Loan sharking operations are on the rise in Macau, with operators taking advantage of the desperation faced by gamblers who are unable to access a quick line of credit.

Gaming related crimes have been on the rise in Macau since the start of the year, with facial recognition ATMs recently being introduce to help reduce illegal money laundering.

Director of Macau’s Judiciary Police, Chau Wai Kuong, said the “gambling related crime situation in Macau remains serious.” He noted an increase in the number of cases of unlawful detention relating to loan-shark operations and said the police would continue to work with the city’s casino operators to increase surveillance to curb gambling related crime.

Why online casinos are safer