1024 Ways have no paylines. While they may sound complex to grasp, they aren’t and are actually quite favourable to the player. We detail everything you need to know about 1024 ways to win pokies and even list some of the best for you to try out at our recommended online casinos.

Originally, 243 ways to win poker machines were the first to enter the market and have continued to grow in number. However, some software developers have gone so far as to create 1024 ways to win, and even more, slot machines.

Pokies have evolved from having just a single payline to having multiple, and while potential payouts have become more likely, they are still restricted. Ways to Win pokies have paylines completely removed from the reels so players aren’t restricted in their winning combinations.

What are 1024 ways to win slot machines?

While many modern online pokies still use paylines, 1024 ways to win slot machines do not, rather they work by allowing the required number of symbols to appear on any reel, at any position to create a winning combination.

By removing paylines, players have more chances at winning since there are more ways to make up a winning combination without the requisite of fulfilling certain rules paylines impose. The payout amount is reliant on how many active symbols are on the reels. On 1024 ways to win pokies there are 5-reels, each with four symbols, which sees five lots of four by four symbols, which adds up to see 1024 possible winning lines per spin.

Learning how to play these types of pokies is quite simple, especially if you have played 5-reel pokies before. 1024 ways to win slot machines have 5-reels, but as mentioned above the biggest difference between standard 5-reel pokies is that there aren’t paylines that require symbols to appear certain way to win.

To play this type of pokies we simply play them the same way as we play 5-reel pokies (by getting the required number of symbols to appear on the reels) though we do not need to activate paylines to win the maximum amount and we do not need to worry about where symbols appear. However, we may need to bet more per spin.

With these two symbols still on the reels, and sometimes even the Bonus symbols we see on standard pokies, players have even more chances to win. So why would you play payline pokies over Ways to Win pokies?

Ways to Win vs Payline pokies

When more paylines were added to slot machines, including up to 100 payline pokies available, slots with winning paylines became more popular. However, since they still restrict payouts, Ways to Win pokies can be more beneficial to players.

With paylines, they all need to be activated for the maximum win, which means if players don’t activate them all, they can miss out. With 1024 ways to win online pokies there is no need to worry about activating the maximum amount of paylines and each spin players can win 1024 ways.

However, players may have to spend more per spin on these types of pokies than payline pokies as their minimum pokies bet limit is higher to make up for the fact that there are so many ways to win. This could perhaps be the only drawback to Ways to Win pokies and if you have a smaller bankroll it may be best to opt for the standard payline pokies.

Where to play 1024 Ways pokies

Slots Million: Slots Million boasts over 1800 online slots titles and many of them are 1024 Ways, making it a top choice for players seeking a huge and diverse range of video pokies to choose from.

House of Jack Casino: A top-rated choice for players seeking an easy-to-navigate online casino with tons of bonuses and 1024 Ways slots for all types of players.

Microgaming has been the leading software developer behind the 1024 ways to win slots, as you will notice below with of our recommended pokies created by Microgaming, and while there aren’t many (compared to the number of payline pokies available), the ones on offer are worth a spin.

While this slot is Christmas themed, it can be played at anytime of the year and offers 1024 ways to win over 5 reels. 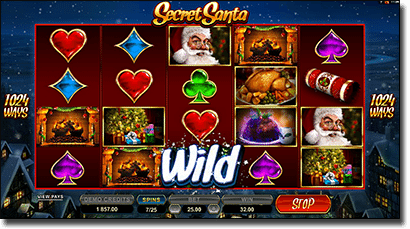 Released in 2013, Secret Santa features the Dashing Wild, which hasn’t been included in one of their slots again until their June 2015 releases, namely Kitty Cabana and Hound hotel. This feature sees a Wild symbol dashing across the reels to form a winning combination. There is also a standard Wild along with the Dashing Wilds.

There are free spins on offer but it isn’t triggered by the Scatter symbols, rather it is just five free spins randomly awarded. The Scatter symbol on the other hand activates the bonus round with three or more, and here players are able to to win cash prizes by uncovering five objects that match.

The Scatter symbols also trigger a Scatter Spree feature which sees all Scatters acting as Wilds and a multiplier of anywhere from 5x to 10x in play. This sees incredibly great potential for big wins.

With so many features, and the potential to win over two million coins if you play the maximum bet of 500 coins, Secret Santa is one of the best 1024 Ways to Win pokies, despite the unseasonable Christmas theme.

Leagues of Fortune, another ways to win slot machine created by Microgaming, follows an underwater expedition over 5 reels with 1024 ways to win. 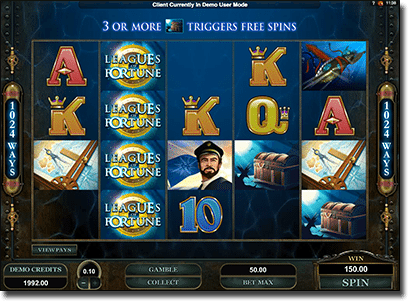 Featuring a captain entering the deep sea via a submarine we come along on the adventure to find hidden treasure, all the while encountering some interesting deep sea creatures, such as a giant squid,

There is also the infamous Gamble feature by Microgaming, however instead of pick the colour or pick the suit to gamble you winnings, it sees a players being taken to a screen that is divided into a red and green section, which features an arrow and a map. Players can opt to make the red section larger to increase winnings, or smaller to decrease them. The arrow will then spin and if it stops in the green section the players wins accordingly, but if it stops in the red section players lose their winnings.