For beginners, playing craps can be compared to partaking in extreme sports – exciting, but intimidating. The level of difficulty for craps has a reputation for being high in comparison to other casino games, but make no mistake, it can be easily learned once the rules are grasped. In this guide, we’ll take you through one of the most interesting and storied games any casino has to offer.

How to play craps

Played with two six-sided dice, the aim of the game is to try and guess what the outcome of the dice will be and wager in support of those predictions.

The game starts off with a shooter, which is one of the players, throwing the two dice down the table.

To determine the outcome, the total of the two dice is added.

The betting is where the fun really begins, and in craps, you can either put money on one roll of the dice, or on multiple rolls.

Where to play online craps

Now that you know how to play, it’s time to find an online casino where you can enjoy yourself and use your new-found skills. Playing online means you won’t be rushed while learning, so you have a chance to go at your own pace and improve your knowledge.

Each of our recommended online casinos offer a practice mode, so you can play for free to build your skills and then, when you’re ready, convert to the real cash money mode. 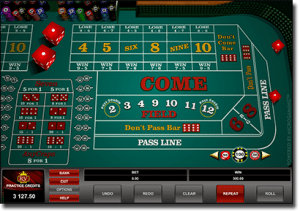 Royal Vegas is an amazing online casino to play craps at and also offers an incredible 3x the odds behind the pass line so we can win easier. You can either download the software at Royal Vegas, or choose the Instant Play option where you will be taken to a slick Microgaming interface with classy and creative graphics.

Play Real Money Online Craps at Royal Vegas CasinoClick on the ‘Table Games’ option then go to the last page of the list of games where you will find Craps. You will then be prompted to play either with real money or in practice mode. You will have to sign up for either of these modes but that only takes a few minutes.

The visual and audio quality of Royal Vegas craps takes players into a virtual reality with the sophisticated table remaining incredibly authentic. You also have the added option of being able to click on the bank feature, making a quick deposit, and updating the casino so you can play with real money. Royal Vegas also has a native app, but Craps aren’t available to play on here yet; however, we will keep you updated and let you know when it is.

G’day Casino is targeted at an Australian crowd and offers a true Aussie experience with some of the most distinctive real money games online, which can also be played in practice mode for free in case you aren’t confident to wager real money yet. With a table limit of minimum one chip and a maximum of 100 this is one for the beginner due to the low table limit. 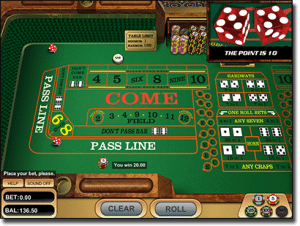 All you have to do is head to G’Day casino, click on the ‘Table Games’ link on the left hand side under game categories, then click on the craps option available. To play with real money you will have to sign up, but you can play for free without registration which is a great option to help indicate whether or not craps is for you.

The table layout and graphics are quite simple at G’Day, so you’ll be able to pick it up in no time without getting lost in a complex navigation design. Additionally, G’Day offers a free slab of VB when you sign up and deposit $100. So if you aren’t any good at craps, at least you will get free beer out of it!

This popular Microgaming powered online casino is also targeted at Aussies. You will need to sign up before playing this one either in Instant Play via flash in your browser or by downloading the software. You will then be prompted with whether or not you want to create a desktop shortcut which can be extremely handy. The interface is somewhat similar to Royal Vegas and you’ll find craps under ‘Table Games’ on the last page.

The table layout is also exactly the same as the table layout at Royal Vegas; however, the colours and audio are different. This is due to the two hosting the same craps software from the same reliable and trustworthy software provider, Microgaming. Casino-Mate also offers a free eBook on how to play craps in case you are really struggling, which you can download from their website.

How to deposit at craps casinos

Craps is an extremely enjoyable game to play once you have mastered the game online, and all of our online casinos offer an array of payment options for you to play with real money. These include VISA, MasterCard, Poli, E-wallets such as Neteller and Skrill, as well as UKash a prepaid card system you cacn buy a retail outlets.

Deposits are quite instantaneous while most withdrawals methods taking from 24 to 48 hours but that is quicker than most postage when you buy something online so try not to be too impatient. Regardless your money is extremely secure due to the 128-bit SSL technology utilised by each of our recommended casinos.