Movies, TV shows, comics, and video games are all entertaining on their own, as are slot machines. However, not just any software developer can pull off creating a good slot based on a quality show, movie, game, or comic book; rather, it has to be by the top leading providers in the iGaming industry.

The top leading software developers that offer the best movie-themed slots include Microgaming, NetEnt, iSoftBet and NextGen. These providers do the graphics justice, which can be difficult since the movies they base the slots on were all once on the big screen. Here are some of the best film themed pokies. 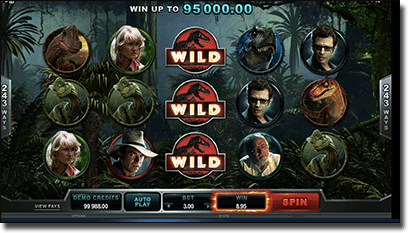 Created by Microgaming, Jurassic Park has soared in popularity especially with the 2015 release of Jurassic World. While this slot is based on the 1993 film, it offers all our favourite dinosaurs, including the T-Rex from the 2015 film as well.

With 243 ways to win, Jurassic Park offers a multi-level free spins bonus round with 12 spins awarded on each level and a varying multiplier. Additionally, there is a huge 1,900,000 coins available for the jackpot.

Jurassic Park is easily one of Microgaming’s most popular online video slots, showing there’s a big demand for high-quality Internet pokies based on our favourite movies.

Batman was originally a comic, however Microgaming have chosen to focus on the incredibly popular movie franchise starring Christian Bale, specifically The Dark Knight (2008) and The Dark Knight Rises (2012) for their two slots.

The Dark Knight is a progressive slot where players can win millions on the Mega jackpot (there is also a Major, Minor, and Mini jackpot available to win too), and has a 243 ways to win format. There’s also 15 free spins with a 2x multiplier, triggered by three Scatter symbols.

The Dark Knight has to be one of our favourites, not only because of the jackpots on offer but also due to the clips of the Joker (played by the late Heath Ledger) included.

The Dark Knight Rises on the other hand doesn’t have a progressive jackpot to win but it still keeps the 243 ways to win format. Following Batman vs Bane, there is a massive 1,780,000 coins on offer to be won and around 10 free spins to be triggered.

While this slot has been based on the 1931 film, the quality has definitely improved and the graphics are much better so you could be mistaken to think it is based on the latest Dracula Untold film released in 2014.

Nevertheless, NetEnt have created a graphically brilliant slot covered in bats across a unique 5×4 reel layout. Featuring 40 paylines, the slot has up to 10 free spins, a unique Bat Feature that creates huge wins, and more. Additionally, there is 80,000 coins on offer to be won. 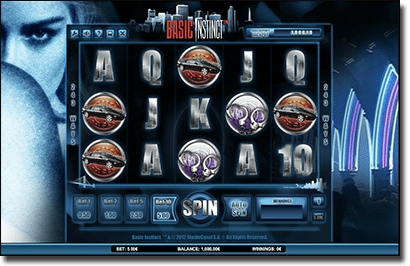 iSoftBet has created this slot based on the 1992 film featuring Sharon Stone and Michael Douglas, and the graphics are quite impressive.

Sharon Stone watches you eerily from the side of the 243 ways to win layout, as the relevant symbols such as handcuffs and cars spin to land you wins. For those of you that can’t quite forget the memorable leg-crossing scene, Stone is still a stone-cold fox in this video slot.

There is a massive 38 free spins on offer on this slot and 364,500 coins available to win.

Considered one of the greatest films in history, NextGen have taken the 1960’s black and white classic film and turned it into a colourful, animated slot machine. The soundtrack adds and eery ambience too.

Other film themed slots by the aforementioned software developers include;

TV shows tend to have more of a following since they are ongoing or have been based on a book so their fans can be a bit harder to please. This could be why there are many more movie-themed pokies than there are TV themed slots.

Nevertheless Microgaming, NetEnt, and iSoftBet have given it a red hot crack and actually have created some very popular slot machines. 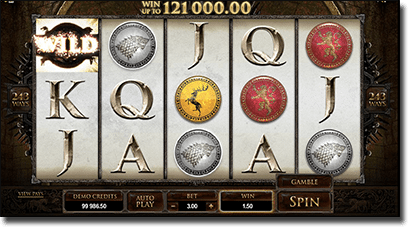 Game of Thrones pokies is based on the HBO TV show, which is in turn based on the George R.R. Martin’s novels, meaning there is an incredible following. Naturally the top leading software developer, Microgaming, took the challenge of making a quality slot version.

Additionally, they have created two to please all fans, one with 15 paylines and the other with 243 ways to win.

The 15 paylines slot offers 75,000 coins as the jackpot, while the 243 ways to win version offers 121,500 coins. Both, however offer a multi-level free spins bonus round with up to 18 free spins to win and a multiplier of up 5x available.

Both also feature the soundtrack of the 20 minute long opening to the show so if that reminds you of darker times, simply mute it.

You either love or hate South Park, and there is generally no in between, but for those who love it will love this slot by NetEnt. It feels like you are watching another South Park episode but with the chance to win money, as hilarious one liners are shouted by all our favourite characters, including Cartman.

There are eight bonus rounds, which is more than the average slot machine, and they offer special Wilds to create wins, free spins, or cash prizes. There is up to 10 free spins and up to a 10x multiplier available with a huge 1,250,000 coins as the available jackpot.

There is also a second South Park slot called South Park Reel of Chaos, by NetEnt, that many have said has better graphics. However it also has half the number of bonus rounds (which is four, so still quite a lot). There are only 121,250 coins on offer in comparison but an unlimited amount of spins with up to a 4x multiplier available.

Based on the cult 90’s TV show, we are happy iSoftBet chose to base the slot on this version rather than the 2009 remake.

It features the classic opening soundtrack and a 243 ways to win format. All our favourite characters line the reels including Kelly, Brandon, Steve, Donna, David, Dylan and more. There are up to 25 free spins on offer and a huge 30x multiplier available, but only 2500 coins for the jackpot.

Any TV show that falls under the Sci-Fi category generally has a strong following, which will pull you up on even the tiniest mistake. Once again this is why it makes sense that Microgaming took on the challenge of creating this slot based on the 2004-2009 American TV show.

Featuring 243 ways to win, players are awarded up to 15 free spins, with a 2x multiplier available, as well as an extra five free spins in a separate bonus round. There’s also 15,000 coins available to win.

Comic fans are similar to TV show fans in that they take even the littlest detail very seriously. We have picked some of the best comic themed slots, by Microgaming, NetEnt, and Cryptologic, that we think have done some of the most popular comics justice.

It’s important to note these slots are based on the actual comics and not TV shows or movies that have been created as a result of the comics. 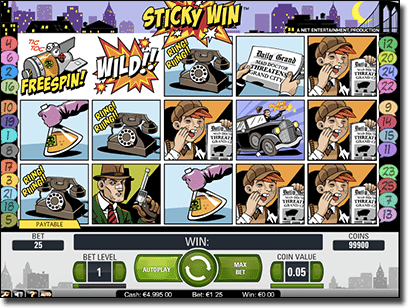 Interestingly, Jack Hammer doesn’t have his own comic rather he is a character in many comics. He first appeared in Marvel’s Daredevil comics but has appeared in others too. Regardless, NetEnt created two slots featuring the Jack Hammer character.

In the first Jack Hammer slot, players can win up to 30 free spins and a 3x multiplier over 25 paylines, with the jackpot at 250,000 coins.

The second Jack Hammer only has 20 free spins and a 2x multiplier, in comparison, but a huge 99 paylines.

The graphics on both are quite impressive, and it feels like you are reading a very high quality comic – only you’re winning tons of huge real money prizes while you’re at it.

The 1993 comic Hellboy has been recreated by Microgaming with stellar comic graphics in tow. It can seem outdated to some, but it has that comic feel which true comic fans will appreciate.

The format is a bit different to the usual slot setup as there is a bonus round activated by Scatter symbols that awards cash instead of free spins, while the Supermode bonus, activated at random, offers 10 free spins and Sticky Wilds.

Additionally, the jackpot on offer for Hellboy is 8000 coins.

While not as popular as Superman, but still incredibly popular, Wonder Woman by Cryptologic is also based on the comic rather than the movies and shows that have been made as a result. It is quite similar to Superman in terms of the style, layout, and number of paylines -50 to be exact. There is also the same Bonus Bet making it a 60 payline slot when activated.

However, there are only eight free spins up for grabs, but there is a Sticky Wild available for five of these spins. Additionally, there is only 5000 coins available for the jackpot. 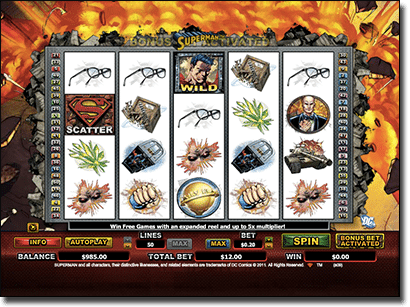 There have been movies and TV series created after Superman but Cryptologic have based the slot on the classic comic, which was responsible for the film and show franchises.

Featuring Superman and the evil Lex Luthor, the graphics are quite simple but still done well.

While there are 50 paylines, there is an extra Bonus Bet feature where you can activate an extra 10 taking it to a 60 payline slot (which is huge).

There is also up to 10 free spins available, a 3x multiplier and a 10,000 coin jackpot on offer for players to win.

Slots based on video games

Creating slots based on video games may seem silly but the fact you can win real money adds an extra element to gaming, especially slots with themes from some of the best video games available.

Microgaming have got this area covered with their highly popular slot machines based on infamous video games. 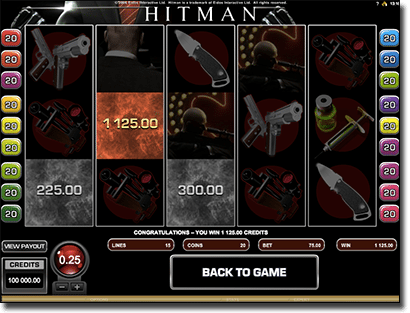 Hitman was first a video game for Xbox and Xbox 360, PlayStation 2 and 3, and GameCube, but has also been the basis for a number of films.

Regardless, Microgaming have mimicked the graphics from the popular video game series for their 15 payline slot.

There are 18 free spins on offer with a multiplier of 2x available, as well as Expanding Wilds and two extra bonus rounds on top of the free spins bonus round. There is a massive 270,000 coins on offer for the jackpot too.

Similar to Hitman, Tomb Raider was a video game before it became a film franchise (the one that features Angeline Jolie). However Microgaming have created two slots, Tomb Raider, and Tomb Raider Secret of the Sword, based on the video game series.

Some may be upset that Microgaming have opted to go with the animated graphics over featuring Angelina Jolie as Lara Croft, but the slot graphics are still of high quality.

The first Tomb Raider slot from Microgaming has 15 paylines and offers 10 free spins, with a 3x multiplier, and a 112,500 coin jackpot.

The second slot has 30 paylines and offers a Super Mode, which is activated randomly offering five free spins. There is also 10 free spins still available with a multiplier of up to 5x if you win consecutively.

There is only a 7,500 coin jackpot on the second version, however.

Play all of these fun themed online pokies games at www.SlotsMillion.com, our #1 casino site for niche video slots.