How to play Tomb Raider pokies

The minds at Microgaming, one of the leading gambling software developers when it comes to online slots production, is the company behind the Tomb Raider online slot. It would have been easy for Microgaming to rest on the subject matter alone but they have pushed themselves to create an engaging experience that almost adds to the Tomb Raider series of computer games and movies. 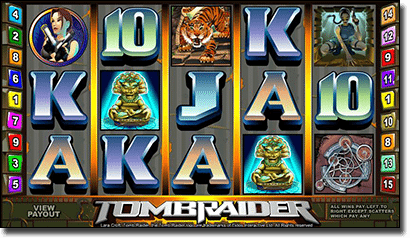 Tomb Raider strays slightly from the normal set up of online pokies in that it is a five reel, 15 payline pokie instead of the regular 20, 25 or 243 payline pokies generally found on the market today.

If you are used to playing these larger payline pokies, it is a little strange at first adjusting to only 15 paylines. With the 15 paylines in mind, Tomb Raider has a minimum bet of $0.75 and a maximum bet of $37.50 with coin sizes ranging from 0.05 to 0.50 credits each.

The game’s graphics are rather lively and dark and the game itself makes eerie background noises as well as the time honoured sound of the reels in motion with each spin.

Free spins and multipliers:
10 free games can be triggered with any three or more scattered Lara Croft bust symbols. The music comes more suspenseful during free games and all wins are tripled which boasts the potential for some massive wins. Unlike a lot of games on the market, the feature can be re-triggered during your free games, too.

Tomb Raider boasts many of the usual suspects when it comes to symbols. In ascending order the symbols are 10, Jack, Queen, King, Ace, the Tiger symbol, the full body Lara Croft symbol and the circle and triangle symbol.

The Lara Croft title symbol is the Wild and substitutes for all symbols except the Lara Croft bust scatter symbol and the Golden Idol symbol. Rolling up five Wild symbols on an active payline wins you 7500 credits. Playing maximum bet and spinning that during the free games, where all wins are tripled, adds up to one of the juiciest wins at 22,500 credits. Not bad for a days work.

Tomb Raider is a great extension of the Tomb Raider series of games and films. A bonus game and free game feature are two very attractive features to your average online pokie punter.

As a seasoned pokie player used to 20, 25 or 243 paylines, Tomb Raider’s 15 paylines can take a little while to get used to because you feel as though you are missing out on wins that you may have got were you playing a game with more available paylines. Despite that, Tomb Raider is an all around fun game with enough bells and whistles to keep you interested for hours on end. For more great online slot games, check out our online slots review page.