If you’re a serious comic book fan, you might get roped into this brilliant original slot only to find it isn’t really based on any established comics. Instead, Net Entertainment have created their own comic series across 5 reels.

This shouldn’t put you off however, with the inventive slot offering some big wins in not the most obvious ways. We follow the adventures of Jack Hammer, a character that could defintiely feature in actual well known comics such as Spiderman and Daredevil, as he takes down the original character, Evil Dr Wuten.

Net Entertainment have done a brilliant job in executing the animations and have created a slot machine that feels like you are reading a comic book. There is a sequel to this slot, and while we enjoy both we have to say we prefer the original.

How to play Jack Hammer

Jack Hammer features 25 paylines over 5 reels with a backing soundtrack that isn’t overpowering until you spin a win and even then it isn’t too dominating. The sounds can still be muted in the top right hand corner.

The betting range of Jack Hammer is quite large and the slot has a medium to high volatility meaning when it does payout it pays big. 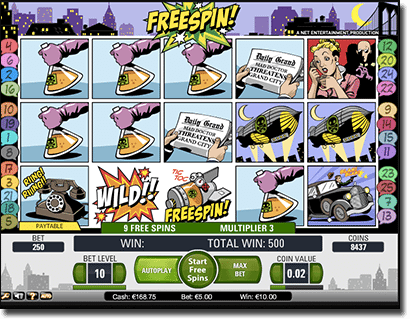 To really create a comic feel rather than a slot machine feel, NetEnt have completely scrapped the use of the 9, 10, J, Q, K, and A symbols and instead have used comic animations as the lower value symbols, including Jack Hammer himself, Dr Evil holding some sort of concoction, a paper boy, a woman on the phone, a blimp, a phone, and much more.

There are two main bonus features in Jack Hammer pokies.

Where to play Jack Hammer

Our favourite place to play Jack Hammer is at Slots Million, as it is our #1 casino site for the top leading video slots. NetEnt have also released Jack Hammer on the HTML 5 platform, so players can spin the reels of the comic-based slot on their smartphone or tablet, regardless if you have an Apple, Android, Windows, or other portable device.

You will also find Jack Hammer available for instant-play at the reliable online casinos recommended in our casino table at the top of this page.

Our thoughts on Jack Hammer

Overall, Jack Hammer is an intriguing and entertaining online pokie for those who have the time to spin for a potentially big win.

For other great online slot games, check out our online slots review page.