Superman is the most widely loved and recognised comic book super heroes of all time. Since his inception in Action Comics #1 in 1938, Superman has appeared in countless comics and cartoons as well as computer games and 10 movies. It was only a matter of time until Superman was re-imagined as an online pokie and, ironically, a production company called Cryptologic were the people to get the job done.

How to play Superman pokies

Superman is a five reel, 50 payline pokie that has two distinct playing modes. When you have first loaded the Superman page from our trusted online casino provider, SlotsMillion.com, at the bottom right hand corner of the playing screen there is a button called the Bonus Bet. Activating this Bonus Bet requires you to be playing all 50 paylines and an extra 10 coins on top of that.

By activating the Bonus Bet you change the Superman scatter symbol into a Superman Bonus symbol, and three of which triggers the Save the World Bonus. Scatter prizes are also multiplied by 50 when the Bonus Bet is activated. 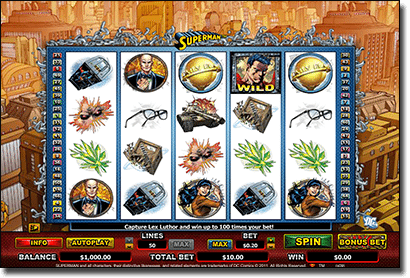 The graphics of Superman look as though they have been lifted straight off the pages of DC Comics from the 1960’s. The gameplay itself is also reminiscent of a by-gone era, appearing a little slow and almost glitchy.

The background graphics show a peaceful Metropolis in normal mode, when the Bonus Bet is activated though the background shows a massive explosion, which is exciting.

Sound effects are kept to a bare minimum in Superman, with the only sound coming from a clunky, cliched “reels falling” sound and no background music. Sure there is a slight “whoosh” and some victorious sounding music briefly heard after a win, but that is it in general play. 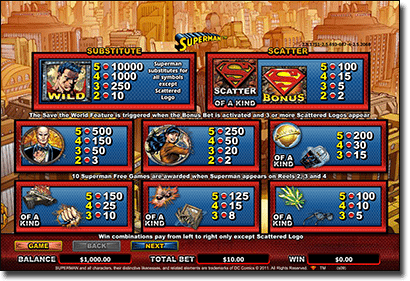 The free games feature is triggered by any three Superman wild symbols on reels two, three and four. This activates 10 free games. During your free games an expanded Superman wild will appear on a random reel, each spin, with a multiplier up to five times. Sadly, the feature can not be re-triggered during free games.

The Superman wild symbol substitutes for every symbol except the Superman scatter/bonus symbol.

The Save the World bonus game can only be triggered when you are playing the Bonus Bet and you spin up and three or more scattered Superman Bonus symbols.

From there you are taken to another screen to find Superman flying through a meteor shower, destroying missiles with his heat vision. Each missile destroyed awards you a credit bonus.

Once Superman has saved the world by destroying all of the missiles, he lands on earth to find three doors. Behind one door is Kryptonite, which ends the game, some hostages, which awards a cash prize or Lex Luthor which can award you up to 100 times your initial bet.

Superman is a pretty odd little game. No background music in general play and just the sound effect of the old “one armed bandit” makes it a little corny. The graphics to this game aren’t the best and look as though they may have been cobbled together in a teenagers feverish, sleepless night.

For the first ten minutes playing this game, I couldn’t help but wonder why a Superman game had a playing symbol that was a massive marijuana leaf – this was before I realised it was supposed to represent kryptonite. But who cares, the features are awesome and offer up the potential for some big wins.