Game developer Cryptologic teamed up with DC Comics years back to being The Flash: Velocity to the world of pokies, and while this isn’t the most impressive of the superhero themed pokies, it’s a great choice for any comic or superhero fanatics, with some nice little bonus features included to give it a boost in excitement levels.

How to play The Flash: Velocity

The Flash is five reel, 50 payline pokies game that can also be increased by up to 60 paylines when the Bonus Bet feature is activated. You can increase the number of active paylines from 1 to 50 by using the arrow buttons, and set your desired bet level using the left and right arrows.

The game specifics are as follows: 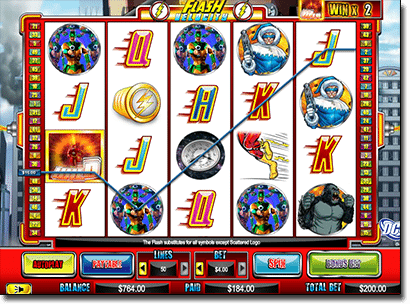 Win combinations pay from left to right only, except for the scatter. Payline wins are multiplied by the amount bet per line, with the highest win paid on each selected payline.

Where to play The Flash: Velocity using AUD

Despite being in operation since the mid 90’s and having hundreds of game up its belt, we don’t see Cryptologic games too often at our recommended casinos (the brand was sold to a third party in 2012).

However, SlotsMillion.com hosts a handful of Cryptologic titles, including The Flash: Velocity along with superhero themed games Wonder Woman, Green Lantern and Superman. You can play The Flash: Velocity here for free play or real money bets, with new players receiving a double deposit bonus up to $100 plus 100 free spins upon depositing funds for the first time.

CasinoSites verdict on The Flash: Velocity

Cryptologic’s The Flash will have a lot of appeal to fans of Marvel and DC, as it genuinely replicates that classic comic book feel. Although it’s quite well designed and very vibrant to the eye, those who have no interest in superheros probably won’t get that much of a kick out of this game.

The addition of the Rogue Features Bonus definitely kicks The Flash up a notch and without a doubt there’s some good chances to strike it lucky here, but whether you dig this game or not will really come down to personal taste.