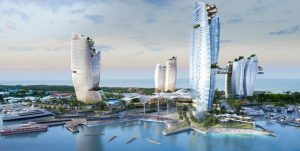 Earlier this month it was revealed that American casino giant Caesars Entertainment was eyeing off on the Gold Coast as the potential site for its first Australian casino. The speculation was later shut down by Premiere Annastacia Palaszczuk who said the Gold Coast would not become a “casino city” and that the only casino license up for grabs was going to Chinese-backed ASF Consortium who had won a bid to build a $3 billion integrated resort on the Gold Coast’s Southern Spit.

It has now been revealed that Caesars Entertainment has signed up with ASF to be considered as the potential operator of the resorts casino facilities. While Packer-owned Crown Resorts was previously rumoured to be in talks with ASF about the casino operations, the two failed to reach an agreement and Crown is no longer involved in the project.

It is understood that Caesars and ASF have signed an agreement for the Las-Vegas gambling group to progress due diligence and commercial terms be considered as the casino operator.

President of international development for Caesars Entertainment, Steven Tight, recently visited the Gold Coast to assess the area for potential development. He was tight lipped about the company’s interest in the Gold Coast, but told local media, “We are currently doing our internal feasibility study on whether another large-scale integrated resort could be supported in the Gold Coast market. All I can say at this point is Caesars Entertainment continues to evaluate opportunities throughout the region to expand our network of world-class properties.”

ASF Consortium was granted rights by the Queensland government four years ago for the operation of a new integrated resort on the Southern Spit area, but plans have been held up due to community protests and disputes over building regulations. The project, which aims to deliver three branded five and six star hotels, serviced apartments, leisure attractions and luxury retail, will also include a world class casino with a range of gaming options – that’s if it gets the government go-ahead.

An independent community consultation about the ASF development is currently underway and the results are expected to be delivered soon.

The backing of a big casino developer like Caesars Entertainment could assist with the government’s approval process and help the development get the green flag.

ASF Group director Louis Chien said the company is waiting on the government for more information so it can proceed with the project. “We will select a casino operator as part of a detailed proposal. We’ve got investors here, we’ve got people waiting. Come to the table. We just need clarity,” he said.

Looking for an online casino instead?