Aquis Casino Canberra given go-ahead on final stage of upgrade 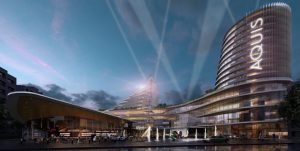 Casino developer Aquis Entertainment made an announcement to the Australian Stock Exchange on Thursday, saying it has been given the go-ahead by government officials to proceed to the next stage of the major redevelopments planned for Casino Canberra.

The $307 million proposal has been in the works since 2015, with Hong Kong billionaire Tony Fong planning on turning the relatively modest Casino Canberra into a world-class leisure and entertainment destination.

Fong’s vision is for the casino to undergo a major upgrade, including the addition of 200 electronic poker machines. Casino Canberra is currently the only casino in Australia not licensed to operate pokies, with gaming machines around the ACT restricted to clubs.

The initial proposal for 500 real money poker machines was knocked back, along with plans to redevelop the Canberra Convention Centre.

If granted final approval, the redevelopment will include a resort precinct with five-star hotel, luxury villas, seven restaurants, designer brand shopping mall, nightclub, bars and a high-end day spa. The integrated resort will include a new entrance that opens on to Glebe Park.

Aquis chief executive Jessica Mellor said she the government’s response was “incredibly encouraging” and that the business proposal involved “many months of research, hard work and diligent planning.”

“Our proposal provides the ACT with a once in a lifetime tourism infrastructure opportunity that will not only facilitate much needed urban renewal in Canberra’s CBD, but deliver meaningful employment and significant economic benefits well into the future,” she said.

“The opportunity to participate in the next stage of the investment proposal is a significant milestone and gives us confidence to continue working with the ACT government on this pivotal project.”

A report released by Deloitte Access Economics on behalf of Aquis in 2016 predicted the redeveloped casino could attract more than 617,000 visitors to the area and boost gross territory product by $541m by 2030.

Not surprisingly, Aquis’s proposal has been hit with major backlash by ACT clubs who have previously reaped the benefits of a monopoly on electronic poker machines in the state. The approval of 200 pokie machines requires Aquis to source the machines from existing licenses, so any gaming machine added to the Casino Canberra means one less for the clubs.

When the redevelopment plans were initially unveiled in 2015, Aquis Entertainment Executive Director Justin Fung said, “We have a vision to transform Casino Canberra into an integrated entertainment precinct that the whole city can be proud of,” he said.
“We are driven by a desire to contribute positively to the cities where we operate and anticipate playing a leading role in the ACT’s inbound tourism market as our project develops. In time we would hope to bolster the argument for direct international flights to Canberra.

“We will work with local suppliers and employ local people, creating significant employment both during construction, and on an ongoing basis once fully operational, assisting with a diversification away from strong reliance on federal government employment.”

The proposal is now in the final stages of discussion with the ACT government.

If you’re looking to for a pokies site instead, you can find plenty from United States. We recommend BetOnline Casino the following sites to find a range of secure online poker machines.