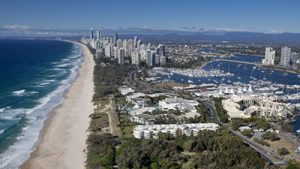 Concept plans for a $3 billion casino resort in Queensland could attract an additional 1.5 million tourists to the state’s beaches, while also creating 10,000 new jobs in what would be a huge boost for tropical Australia’s economy.

ASF Consortium’s plan to bring the giant casino resort to the Gold Coast would see construction taking place across 5ha on The Spit.

James Packer’s Crown Resorts is in negotiations to manage the property, which will include a hotel, apartments and entertainment areas alongside the casino resort.

The plans reveal a stunning five-tower precinct, with five and six-star hotels expected to dominate the skyline in the area.

Serviced residences will also be in the area, and it’s expected to be a highly sought-after residential spot, sitting between Sea World and the Gold Coast Fisherman’s Co-Operative.

A new boating destination was also part of the plan, while roads will be widened and a bridge built to ease traffic and help traffic flow through the area.

“With construction likely to occur after the Commonwealth Games, this will deliver ongoing buoyancy to the region, ensuring local jobs are ­retained,” Mr Chien said.

“This project will also ­attract a projected 1.5 million additional tourists each year to the Gold Coast.”

Mr Chien iterated that it would grow the existing tourism market, with an emphasis on attraction new visitors to the region.

The Department of State Development will make the site and floor plans public, at which point a three-month community consultation period will begin.

Mr Chien is keen to see more certainty around the project and how it’s developed.

“We’re keen for the state to provide overall planning clarity for the area and understand how the Gold Coast Integrated Resort fits,” he said.

Sea World would also see a boost from the project, with it expected to double in size to become the country’s biggest theme park. Village Roadshow, Sea World owners, said it supporter the “visionary” development.

Opposition frontbencher John-Paul Langbroek said he was broadly supportive of the project, but that he was concerned about traffic issues, as well as the three-storey height limit on the Spit.

“[This] needs to be addressed and that’s why I’ve been calling for a master plan to guide development,” he said.

In response to queries regarding the heigh limit, Premier Annastacia Palaszczuk said any plans needed to be studied, and that community consultation needed to take place.

Crown Resorts has signalled that it is in ongoing negotiations with ASF.