Welcome bonus: Up to as much as $600 in a free matched deposit bonus.

With thousands of poker tournaments and cash games live every day, PokerStars remains the largest online poker card room in the world. With approximately 50 million players registered at the start of 2012, PokerStars continues to develop some of the most advanced and interactive forms of online poker gaming, and the company makes it software and real money gaming experience available to poker players. 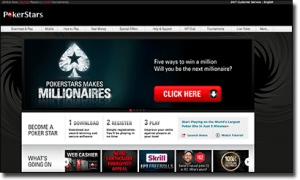 Before we get to the heart of what PokerStars is all about – real cash live, interactive and multiplayer online poker – we want to touch on safety and licensing in relation to online poker gambling.

PokerStars holds its gaming license with the Isle of Man Gambling Supervision Commission, an independent gaming regulatory body which concerns itself with maintaining a crime-free industry, ensuring all gambling services offered by its license holders remain fair, that players are treated to a secure experience.

PokerStars is one of the most trusted online gaming platforms, and is held to the highest standards when it comes to treating customers fairly and maintaining a safe and fun environment.

PokerStars has the largest catalogue of games of any online poker room, as well as thousands of different online and mobile tournaments which range from free entry to buy ins of up to $1,000 for high stakes players. Below is a range of the available games you can partake in, as well as a list of popular tournaments on offer.

PokerStars offers one of the greatest selections of online tournaments for both online and mobile gameplay. Here is a brief rundown of some of its most popular:

Tournaments vary from buy in level to skill level, with an assortment of guaranteed prize pools, so topping as much as $1,000,000 (The Sunday Million – the biggest weekly poker tournament online, anywhere), and other offering players the shot to win up to $90,000 in minutes, with as little as a $1 buy in (Spin and Go). Partake in Satellite events, check the multi-table tournament leaderboard, and start enjoying the world of online poker tourneys with hundreds of thousands of other daily enthusiasts.

PokerStars offers an Android application to indulge in real money poker ring and tournament games, as well as an iOS (iPhone and iPad) app.

While there are less gaming options to choose from via the apps, players still gain access to a wide variety of gaming, all poker specials, bonuses and promotions, secure banking (as detailed in the section below), player options and settings, and account details. Quality, speed and interface all keep to the high standards employed by PokerStars.com.

Registration at PokerStars.com is a simple, free of cost process which requires few details such as full-name, username, password, email, country of residence and date of birth.

Once registered, players have the option to deposit real money and enjoy some of the cash bonuses PokerStars has to offer, including up to a $600 matched welcome promotion and a free $20 for a $20 deposit, along with the ability to rack up VIP Player Points (VPPs) which accumulate when you play tournament or cash games with a fee or rake. There are also daily, weekly and monthly promotions and competitions with huge prizes and rewards which you should keep an eye out for.

PokerStars has and continues to maintain a committed and trustworthy brand, and its banking process for real money players runs in line with this brand. On deposit, your money is exchanged for USD (U.S. Dollars) so all players compete against each other utilising the same currency. Your local currency will be exchanged at the official daily rate. Below are the available deposit and withdrawal options you can access:

Check PokerStars for speed of transactions (most methods provide instant access to your cash). Note mobile banking has fewer options. There are ample games which allow you to enjoy poker in free play mode, especially good when you are learning the ropes.

24/7 support is available via email at [email protected] or by filling out a Contact Support Form, while PokerStars has a FAQs page which will likely answer any questions you have.