There are three things I love in this world: pokies, a beer and women in bikinis. Microgaming – in their infinite wisdom – have created a game which allows me to indulge in all three at the same time. I can get comfy at home with a beer and play Microgaming’s new online pokie, Bikini Party, which counts for women in bikinis and a roll on the pokies: two birds with one stone.

Bikini Party is a five reel, 243 ways online pokie that can be played for free or real money through any Microgaming powered online casino, such as SlotsMillion.com. Bikini Party has a betting range from $0.25 to $125 per spin, playing all lines, which makes the game available to all sorts of punters, great or small.

Like any good bikini-themed party, this online pokie is based on the beach, with the bikini clad women playing a game of beach volleyball. This theme is carried throughout the game to great affect. The bright, colorful graphics gives Bikini Party a really vibrant, summery feel. 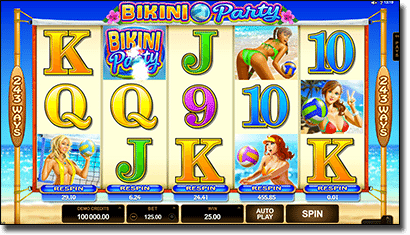 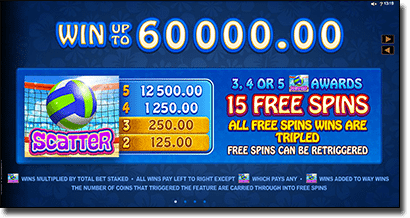 Bikini Party boasts a very unique feature in general game play called the re-spin feature. At the end of every paid spin the bottom of each reel will show a credit cost. This is the cost of re-spinning each individual reel. Each reel’s re-spin cost is based on the possible win you could hit by buying the re-spin.

There is no limit to how many re-spins you can make with only one reel being able to be re-spun at a time.

One cheeky little tactic that I try to great success is whenever you have two scatter symbols from your initial spin, re-spin the cheapest reel until you get a third scatter to trigger the feature. The only bummer about this feature is that it isn’t available during free games. Keep in mind adjusting your bet level forfeits re-spins for said round.

Any three or more scattered volleyball symbols triggers 15 free games with all wins tripled. Just beware that the re-spin feature is not available during the free games, which leaves the free spins in Bikini Party like any other 243 ways pokie.

In descending order of value, the playing symbols of Bikini Party are:

The Bikini Party symbol acts as a wild and substitutes for every symbol, except the volleyball scatter symbol.

Bikini Party is a great game full of animated eye candy. If it weren’t for the unique re-spin feature available during all paid plays, then this would be a generally run-of-the-mill pokie. But the re-spin feature genuinely sets it apart from every other pokie on the market today.

The ability to re-spin to create bigger wins or trigger the feature is an ingenious addition. The only let down is that the re-spin doesn’t translate to your free games too. It makes the free games feature a little bit of a let down after playing paid games with the re-spin feature.