Emperor of the Sea pokies review

Emperor of the Sea pokies review

Emperor of the Sea is a Chinese themed online pokies game from Microgaming, featuring wilds, scatters and a lucrative free spins bonus. It plays on the Chinese belief the colour red is lucky and the number eight is particularly prosperous, so this is a game to suit all you superstitious players out there. We explain how to play Emperor of the Sea for real money at the best online casinos.

Where to play Emperor of the Sea pokies

How to play Emperor of the Sea Emperor of the Sea is a five-reel pokies game with the unique option of playing either 38, 68 or 88 fixed paylines. To play, you need to select the number of paylines, your coin size and the number of coins per spin, then hit the ‘spin’ button once your preferred wager is in place. An auto-play function also allows the computer to play up to 500 spins on your behalf, but players are advised against this as it’s a sure way to burn through your bankroll at a rapid pace.

The specifics of Emperor of the Sea are as follows:

Emperor of the Sea gameplay features and bonuses 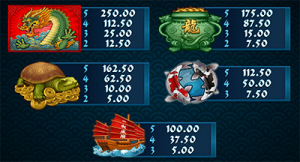 The high paying symbols in Emperor of the Sea are made up of authentic Chinese themed imagery, like koi fish, dragons, ships, tortoises and urns filled with gold coins. Low paying symbols are the standard 9-10-J-Q-K-A which have undergone a slight Oriental makeover with the addition of some Chinese detailing. For the wins that count, you will want to land the wild and scatter symbols, which offer the biggest winning potential and the chance to trigger the games bonus features:

Wild Symbol – The Emperor of the Sea logo acts as the games wild symbol, which can become stacked during the base game and free spins. The wild substitutes all other symbols to form a winning combination except the scatter symbol. 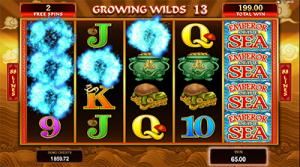 Scatter Symbol – The golden ingot is the games scatter symbol, which is the highest paying symbol and is also responsible for triggering the free spins bonus. Land three of more scatter symbols anywhere across the reels to receive eight free spins.

Free Spins – Once triggered, you will be taken to a separate free spins bonus screen which features Rolling Reels and Growing Wilds. During your free spins, Rolling Reels can award multiple consecutive wins, while the wild stacks grow by one for every spin, awarding up to a maximum of 15 Growing Wilds.

Where to play Emperor of the Sea for real money

These casinos use instant-play, which means you can play Emperor of the Sea directly over your Web browser without having to download any software. You also have the option of sampling this game for free in practice mode, so you can see for yourself if you like it before committing to a real money wager. If you do decide to play for real money, these recommended casinos offer plenty of safe deposit options using trusted payment methods like Visa, MasterCard, Neteller, Skrill and Paysafecard.

OnlineCasinoSite’s verdict on Emperor of the Sea

Emperor of the Sea is yet another game using Microgaming’s standard pokies template, so there’s not much to get excited about. Graphics and animation are basic and even a little outdated, but will appeal to Chinese players who are superstitious about the lucky potential of the number eight, which features heavily throughout this game. During our testing wins were few and far between, until the free spins bonus was triggered and that’s when Emperor of the Sea really has its time to shine. All up, this is a pretty average game and we hope Microgaming raise the bar for further releases to come in 2017.