If you aren’t a regular gamer, it’s easy to think that this slot is based solely on a paid killer. While this is partly true, the slot is actually based on the incredibly popular video game series, Hitman.

Available on Playstation, Xbox, Microsoft Windows, GameCube and some of their later versions, Hitman follows the story of Agent 47, a trained assassin who is hired to carry out jobs amongst the wealthy.

While there has been an adaptation on the big screens, Microgaming also jumped to it in 2008 (just a year after the film came out) and created their own slot adaptation, which we are reviewing here today.

While there have been quite a few Hitman games in the series, there is just the one slot by the top leading software developer that does the graphics from the video game justice.

How to play Hitman

Microgaming’s Hitman offers 15 paylines over 5 reels with a soundtrack that makes you feel like you are playing a video game rather than a video slot. You can easily mute these sounds in the top right hand corner of the screen if you aren’t a fan, though it does add a suspenseful ambience.

The graphics coincide with the video game and if you’ve played it before you’ll definitely recognise them, but if you haven’t there are all the usual weapons a trained assassin would have, including guns, knives, syringes, a high-tech computer, and more. There are also some sneaky side on, and back shots of Agent 47, with all symbols and graphics in HD. 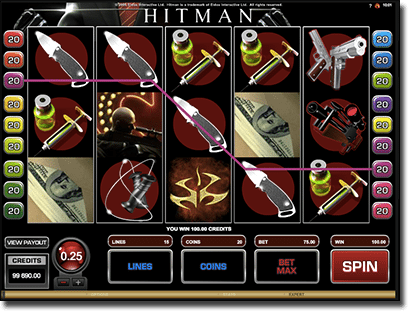 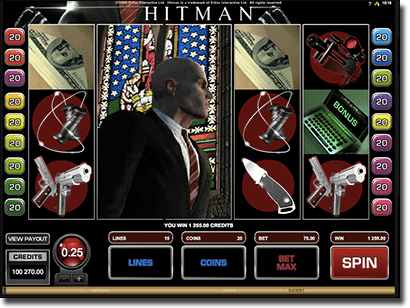 There are three bonus rounds and these include; 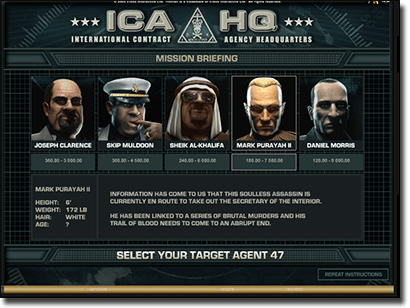 Insignia Bonus: Once you have activated the Insignia Bonus with at least three Insignia Scatter symbols (gold symbol) you are able to pick a special bonus amount and here you can win up to 20 times your initial bet.

Contract Bonus: Once you have triggered the Contract Bonus with three or more Mini PC Scatter symbols you will be prompted to pick out of five targets, each with a comical blurb underneath. This will determine the bonus amount you will receive and each target as a range of what you can win. Then you will be prompted to pick one weapon out of five and this will determine the multiplier attached to the bonus amount you are awarded.

Free Spins Bonus: Spin at least three of the ’18’ Scatter symbols and you will activate the Free Spins Bonus where you are awarded 18 free spins, with any win doubled.

Both the Insignia Bonus and Contract Bonus can be triggering during the Free Spins mode, but any wins here aren’t doubled.

Play Hitman on your mobile device

Hitman is also compatible with smartphones and tablets, including Apple, Android, and Windows devices. All of our aforementioned web casinos have a mobile site so you can click on any of the above links via your mobile browser to play Hitman on your portable device.

Where to play Hitman for real money

Hitman is incredibly popular and one of Microgaming’s most successful real money video slots. Therefore, it’s widely available at an array of reputable and safe online casinos which host Microgaming software. We recommend for new players and long-time online pokies enthusiast alike to visit any of the casino sites in the table above. This is our list of recommended slot sites that host Microgaming titles, with games available for instant-play and some great welcome bonuses available.

As you can see there is quite a lot to this slot, so if you are after a simple slot this may not be for you. But with so much going on, there are so many chances to win. We managed to trigger the Contract Bonus twice during our short time of playing the slot, with many Expanding Wilds granting us solid wins along the way.

Overall the slot, is incredible in terms of graphics and audio, and highly entertaining due to the multi-level bonus rounds.