Titans of the Sun Hyperion and Theia review

Titans of the Sun Hyperion and Theia review

Titans of the Sun – Hyperion and Titans of the Sun – Theia are two Microgaming pokies combining mythological greek gods and huge cash payouts. While it seems like Microgaming have created the two to address the entire pokies audience – male and female – we can’t help but think that one is better than the other.

How to play the Titans of Suns slots

It’s rare we do a review of two slots in one, but the two October 2015, slot releases from Microgaming are so similar that including the two will allow you to see the minor differences between the pair.

Both slots feature 15 paylines across 5 reels and offer the same gameplay in terms of minimum and maximum betting limits, and the number of coins, while there are a few differences in terms of the bonus features. 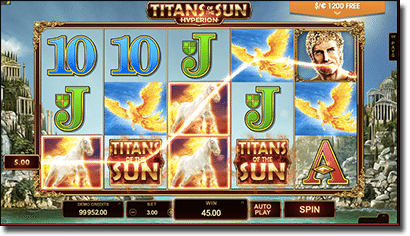 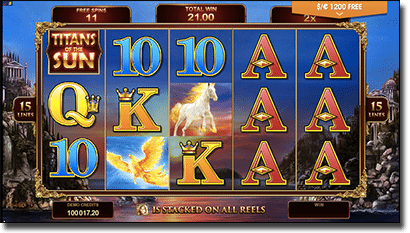 The slots both include a beautiful Mediterranean backdrop of blue skies that transforms into a beautiful sunset when you activate the Free Spins feature.

Titans of the Suns slots symbols

Both slots feature the same symbols, except for the main characters are different of course, with Hyperion featuring on his slot and Theia featuring on hers, both acting as the second highest paying symbols and both appearing Stacked. 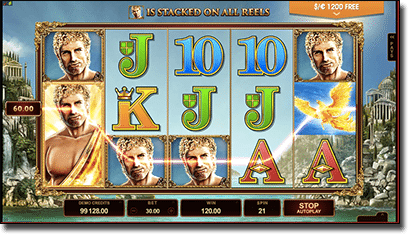 While the highest paying for both is the Wild symbol, detailed below, the payout is different on each slot, along with all the other symbols.

Wild symbol: The Wild symbol is the same for both slots, and is the Titans of the Suns logo. It substitutes for all symbols except the Scatter to create winning combinations. If you spin five you will get the top payout in the base game of 20,000 coins for Hyperion and 4000 coins for Theia.

Titans of the Sun bonus features

This is where the differences can really be seen between the two, and though they aren’t huge they still may determine which slot you will choose to play first.

Free Spins: Spin at least three Scatter symbols on either slots to activate 15 free spins. Here the difference between the two slots see a multiplier of 2x applied on the 15 free spins in the Theia version, while a re-trigger of the 15 free spins is available in the Hyperion version. These additional features are exclusive to their version.

Mystery Stacked Symbols: A unique feature to the two slots is the Mystery symbol feature and sees the sun symbol transforming into other symbols randomly, except for the Wild symbol. It can also appear stacked that can create some potentially large wins. This feature can appear on any of the reels at any time in the game and the Free Spins feature.


Play Titans of the Sun for free


Our thoughts on Titans of the Sun

Both Titans of the Sun Hyperion and Theia are stunning in terms of the graphics. The two slots are very similar in gameplay which can see many players not even bothering to compare the two. However, Hyperion seems to payout more regularly (in our opinion) and see bigger pay outs too -as confirmed by the paytable and total jackpot on offer.

While the 2x multiplier does seem more appealing than a re-trigger, if you can manage the latter it would be the better outcome. Therefore, we’d have to say Hyperion stacks up better than the Theia version.

Overall, the slots are quite similar but if you want bigger and more regular payouts opt for the Hyperion version.

If you’re looking for a new online casino to try, one of our favourites is Slots Million. It offers up to $100 in matched deposits for new real money players and features all the latest Microgaming additions, including the two Titans of the Suns slots.