History of roulette: Why the little wheel is a classic

History of roulette: Why the little wheel is a classic

Few historic tales are as riddled in myth and legend as the history of roulette. The “little wheel” came to exist purely out of chance, fitting considering the nature of play. Designed merely as a means to serve the study of mathematical probability, 17th century casinos jumped at the opportunity to serve the royalty of the day with a game fit for a king.

Roulette, which roughly translates to mean “little wheel” in French, has one of the more fascinating tales of creation among all casino games, from its beginnings as an exclusive backdoor game for the rich elite, to its current place as one of the more popular online and land-based casino games available.

Having gone through little change in design and rules since it was first played in the late 1700s, Roulette has became a casino staple across the globe. As such, its beginnings have been the subject of much conjecture and myth, including tales of a “deal with the devil”.

Where it all began

Roulette in its most primitive form was invented by French physicist and mathematician, Blaise Pascal, in the 17th century. Pascal’s profession should come as no surprise considering Roulette is a game of odds and statistics. The “little wheel”, as it came to be known, was actually the product of another Pascal invention: the perpetual motion machine.

Pascal’s goal with the machine was to create a wheel that would continue to spin without drawing energy. That means it would continue to function without being continuously pushed or spun. Being a physicist, Pascal should have known the laws of physics make this impossible, but there isn’t a single law in the universe that would keep a good inventor down.

Unfortunately, Pascal failed. As he soon realised his ambition was no match for the laws of physics. He did, however, succeed in creating the Roulette wheel, even if that wasn’t his intention.

This led a number of powerful European elites to use the game for entertainment, and, of course, a little revenue raising. Legend has it that Pascal made a “deal with the devil” to learn the secrets of Roulette, which would explain the wheel’s combined number total of “666”.

Of course that’s all myth, and now you have a little context as to why so many films depict roulette as the game of the devil.

The rise of the casino

Some historians attribute the rise of the casino as we know it today to roulette, in that the game itself was used as a means to attract the masses and generate income for the house (and sometimes the state). Pascal’s early wheel design was never used for the game itself, and it wasn’t until the late 18th century, almost a 100 years later, that a 36-number wheel was being used.

It didn’t take long for casinos and elites to realise they could get a lot more out of the game, and in 1842, Francois and Lois Blanc redesigned the roulette wheel to add a zero, specifically for King Charles III of Monaco. Charles had built a casino, and this new roulette wheel would prove to be a big hit for players and the house, with the additional number increasing the house edge and netting the Kingdom more revenue.

Almost two centuries later, it’s easy to see where Monaco’s culture of upscale-gambling began. Charles had hoped to turn his kingdom’s fortunes around, and did so thanks almost single-handedly to Roulette. Throw in France’s decision to make gambling illegal around the same time Charles’ casino opened, and it’s obvious why Monaco was built up to be the glitzy destination it is today.

Soon enough, Roulette made its away across the Atlantic ocean to the United States, and in typical fashion, the Americans claimed the game for themselves and added another zero, bringing the total number of pockets on the wheel up to 38, increasing the house edge further in the process. 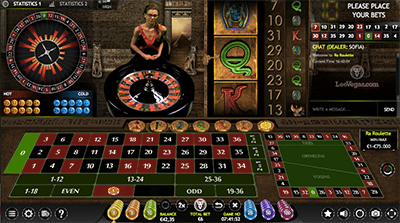 For more than a century, roulette was a game you could only play in land-based casinos. Want to play European Roulette? A trip to Monaco may have been in order. Want to try your hand at American Roulette? Las Vegas was the place to be. Of course, the different variants of roulette, including French Roulette and its unique outside-betting offerings, made their way across oceans to casinos in other parts of the world, but it wasn’t until the rise in online casinos that players were truly able to experience the best of Roulette.

No longer are you bound by the favoured Roulette variant on offer at your local casino. Instead, you can jump online to any number of casino sites and choose from a wide variety of Roulette games, from European and American, and even the fancied French Roulette.

You’ll get the same odds and betting options when you play roulette, and while it might lack the live excitement that you get playing roulette at a live casino, online roulette is a fast and fun way to play your favourite casino games. And you won’t need to make any deals with the devil.