Age of the Gods pokies review

Age of the Gods pokies review

Playtech’s Age Of The Gods offers a huge progressive jackpot, taking players through a fascinating mythological world of the Gods on the way to free spins and cash prizes. With four different free spins bonuses – covered across the four Gods of Athena, Hercules, Poseidon and Zeus – Age Of The Gods promises big wins and fast, frantic play.

Where to play Age of the Gods

How to play Age Of The Gods 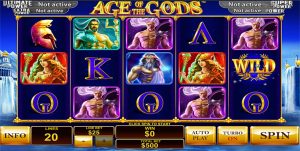 Age Of The Gods is played across 5 reels and 20 playlines, and is playable across desktop, mobile and tablet. You have a nice betting range starting at $0.20 and going up to $500 a spin, which, if combined with the epic four-pronged free spins bonus can net you some huge wins. Sign up at www.Casino.com to start playing for fun or real money today.

Athena acts as the highest paying symbol of the four gods, rewarding you 1000x times your bet for five on a payline. If you land 5 laurel wreath wilds across the paylines, however, you can potentially win 10,000x your stake. As you can see, there is the potential for big wins in Age Of The Gods, and what it lacks in extra modes outside of the free spins in makes up for with sheer reward, offering a progressive jackpot on top of multipliers, Wilds and four free spins rounds, each of which can be won back-to-back.

Before the dive into the game’s bonus features, let’s take a look at its betting structure.

Playtech’s design in Age Of The Gods must be applauded. This a superbly designed slot, with bright colours, fast action, a great “Turbo” mode to keep the action fast, and some nice transitions between the base game and the free spins. Triggering that bonus will set off a symbol-match mini-game, in which you need to find three of the same god to unlock its corresponding free spins bonus.

There is a catch in this mini-game and you might not end up with any spins at all, but it’s designed in such a way as to offer a stressful but fun path to big wins and additional bonus rounds.

Age Of The Gods gameplay and bonus features 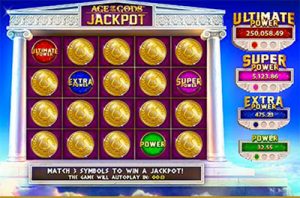 Age Of The Gods’ bonus game is restricted to a free spins bonus, although its a two-step process, which could see you return to the base game without having won anything. It’s a harsh mistress in that regard. You can win quite a bit including 10,000x your bet simply by matching certain symbols across five reels, so even if you don’t land the bonus spins, there’s still plenty of ways to win big, particularly with Wild symbols and a combination of god symbols.

Let’s take a deeper look at what Age Of The Gods offers on the gameplay front.

Wild: The Wild substitutes for all symbols except the scatter. Landing five across all reels pays 10,000 your line stake for 5 reels.

Pantheon of Power On Reels: If all five Gods appear consecutively on a payline from the first reel, you’ll win 200x times your line bet, or 10x your stake in a cash prize.

Age of the Gods: This feature is triggered by getting three or more of these symbols anywhere on the reels. When this happens, 20 Age Of The Gods coins will appear on a wall, and you’ll need to flip them over until your find three of a kind. However, unlock the enemy and the bonus will end. Win this mode and you’ll get 9 free spins, with four variations available.

Where to play Age Of The Gods 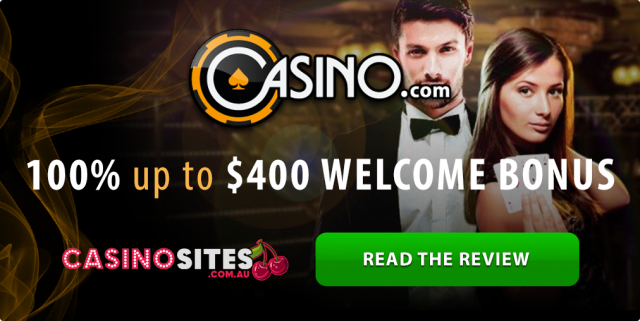 You can play Age Of The Gods by Playtech exclusively at www.Casino.com. Casino.com has been verified by industry watchdogs like eCOGRA, is safe and regulated for player deposits, and has hundreds more pokies on offer from Playtech and other game developers.

Age Of The Gods seems like a slot that might suit players with a bigger bank roll, because the free spins bonus doesn’t come around as often as one might like. That sound, there’s the potential to win big by landing Wilds and five gods across all reels, so not all hope is lost. It’s easily the best of the Age Of The Gods series, and is worth checking out simply because its free spins bonus is a lot of fans, and goes on for what seems like an eternity.