Draw your swords as we go back to an early Chinese dynasty in this Ancient Warriors slot review. Crazy Tooth Studio released this brand new slot in August 2020. It features four reels and six rows of symbols, offering up to 50 different ways to win.

You can expect high volatility and a maximum payout of 1807 times your initial wager. Ancient Warriors focuses heavily on a historic Chinese theme, presenting us with a backdrop of a majestic temple and clay warrior statues.

The video games graphics are well done, complemented by its vivid color scheme and entertaining animations. There’s also a fantastic soundtrack that brings it all to life.

Although the higher valued symbols don’t exactly burst with earning potential, it’s made up to you with multipliers in the form of wilds. There is also a scatter symbol and even a few bonus spins on offer.

How to Play Ancient Warriors Slot at Microgaming Casinos

Before embarking on your quest, you need to know how to play the Ancient Warriors slot at Microgaming casinos. We have put together a list of the top online casinos where you can find this exciting slot. The best casinos to play Crazy Tooth Studios games are:

If you don’t have an account at any of the casinos mentioned above, simply sign up and you can get started right away. Once you’re registered, deposit some real money into your wallet and start spinning on Ancient Warriors.

You should also take a look at any of the welcome bonuses specifically designed for new players. These promotions usually give you some extra playing credit and even a few free spins. Just make sure you’ve read the wagering requirements to avoid any upsets when it comes to drawing your winnings.

When it comes to the Ancient Warriors gameplay, it’s rather straightforward. To win, you need a combination of three or more matching symbols on any adjacent reels. There is a minimum bet of 0.20 credits and a maximum of 115 per spin.

If you’re the impatient type, you can enable the quick spin option that keeps taking your initial bet until a winning combination appears. Alternatively, an autoplay setting allows you to sit back and enjoy as everything is done for you. Set your win and loss limit, so things don’t get too out of hand, and the number of spins you’d like completed.

Like all slot games, no symbol is valued the same. In Ancient Warriors, the high valued symbols come in the form of a dragon, a monkey, a cat, and a snake. You can also find the usual low-rated symbols represented by card values between Ace and jack.

The action continues with the addition of multipliers, wilds, and scatters that can lead to huge wins. This is really an online slots game worth playing. 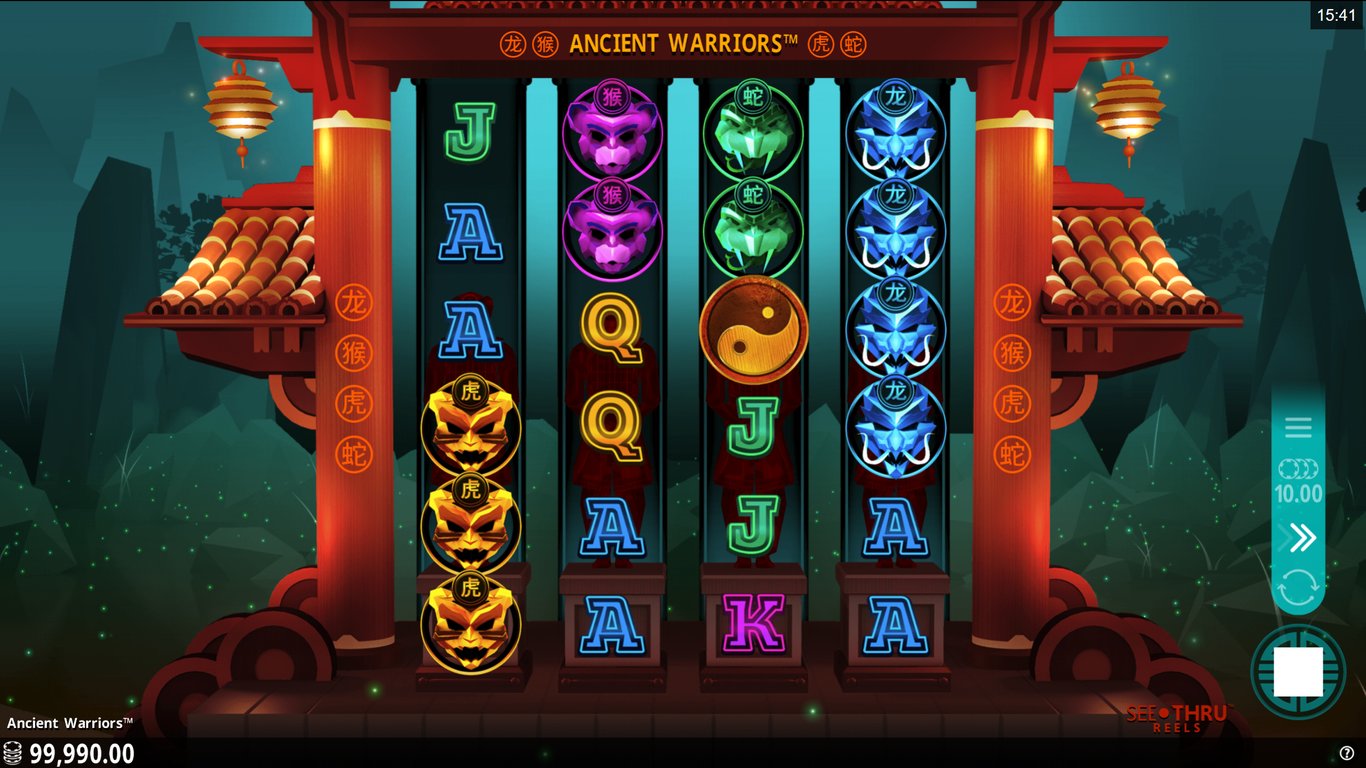 If you’re not ready to lay down some real money bets, there’s an Ancient Warriors free play option. The demo version allows you to try it out without any risk whatsoever. There’s even a short tutorial to bring you up to speed, if you ever get confused.

The free play version gives you 100,000 credits to wager on spins, to get well acquainted with all the mechanics. Remember that you can’t win any real money while playing the demo, so don’t get too excited if you win big.

To access the Ancient Warriors bonus rounds, you’re going to want to look out for two symbols.

The feature symbol, represented by a Chinese character, transforms either into a wild or a multiplier. The wilds, shown as the Yin & Yang icon, can replace any of the symbols to create a winning combination.

Next, the feature symbol becomes a multiplier when three or more stack up on a single reel. They transform into an ancient warrior, slicing through the symbols with his blade, awarding a multiplier of up to ten times to your winnings.

You can win Ancient Warriors free spins when you land on three or more scatter symbols. Once triggered, you’ll receive between five and ten bonus spins, depending on the number of scatters.

During your free spins, any featured symbols will freeze on the reels, creating the potential for some gigantic wins.

To conclude our Ancient Warriors review verdict, we feel the video game makes enormous strides with its detailed graphics and exciting animations. The gameplay is entertaining, but the average rewards on offer don’t exactly match its high volatility.

Overall, Crazy Tooth Studio has created a fun game, but it probably won’t hold your attention for long periods. That being said, it is brand new, so there is always a chance the developers update its rewards system.