Retro gaming is a very popular sub-genre when it comes to online pokies. A great many people enjoy re-living their youth through brand new online slots, and this idea is epitomised by production company Thunderkick’s latest pokies offering, Arcader.

Arcader is a five reel, 15 payline online slot that can be played for free or real money at any of our promoted online casinos.

The first thing you might notice about Arcader is the contrast in graphics. Arcader mixes sharp, modern graphics and classic pixelated symbols to create an epic-feeling online pokie that just feels larger than life and is chock full of charm. 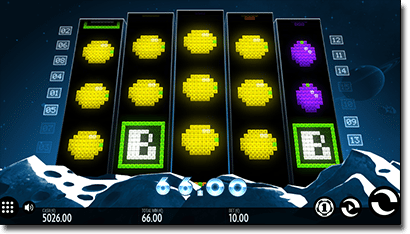 The playing screen itself is full of retro, pixelated symbols that wouldn’t look out of place in a 1970’s arcade, while the background shows sharp, modern graphics of the stars in space with the foreground of mountainous alien landscape slightly overlapping the play screen.

This contrast and melding of graphics from a by-gone era and modern capabilities works terrifically to create an epic, almost timeless feel. This is paired perfectly with a heavily synthesised background tune as well as traditional spinning slots sound effects.

Arcader has also pioneered a very unique symbol in the “expander”. This symbol, represented by a double ended arrow, sort of acts like a wild and will only expand across the entire reel it is on if by doing so it will contribute to a win.

Once triggered, the playing screen essentially turns into an elaborate three card monte. From there all the symbols are covered with question mark symbols. You get to choose one symbol at a time with each different symbol producing a different cash prize.

When you reveal a red cross, the feature game is over and whatever you have uncovered becomes your win for the feature.

During free games any position on reels two, three and four can be randomly electrocuted into a sticky green wild symbol. If this happens the green wild will remain in place of your free spins.

Where to play Arcader pokies for real money

Thunderkick’s games are spreading across our top recommended casino sites as they grow in popularity and number. You can currently play Arcader and others in Thunderkick’s catalogue for real money at the leading casinos in our table at the top of this page.

Arcader is a terrific stand alone game that somehow melds old and new aspects to create a completely new and original gaming experience. Every part of this game works together to create gaming perfection.

The gameplay is easy, fluid and seamless. The sound effects, graphics, back ground music and monotonous female voice over saying “Awesome” or “Great” after your wins add together to create an almost perfect gaming experience.

Stacked symbols and wilds give you the idea that a big win is just around the corner. This is especially so if you manage to get a swag-load of sticky wilds during a x9 multiplier on your free games. This game literally has it all: a feature, a bonus game and its own little creation in the clever little expander symbol.