Recently there has been a resurgence in the popularity of Batman which started with director Christopher Nolan’s dark and edgy Dark Knight trilogy. Online pokie producers NextGen have continued the Dark Knight’s crusade in this successful attempt at giving us the dark and edgy Batman online pokie.

Batman has been part of the social fabric ever since his first appearance in Detective Comics #27 in 1939. Since then Batman has appeared as countless cartoons, toys, comics, computer games and a bizarre and camp live action television show starring Adam West.

The Dark Knight finally weaselled his way on to the big screen thanks to quirky director Tim Burton. Comedian Michael Keaton brought Batman to life while Jack Nicholson breathed life into his arch nemesis, the Joker.

Burton piloted the second Batman movie, Batman Returns before director Joel Schumacher made Batman Forever and Batman and Robin, which turned the franchise into a laughing stock, most notably by introducing nipples and a G-string into Batman’s costume.

How to play Batman pokies by NextGen

Batman, by NextGen, is a five reel, 50 pay line online pokie with flexible betting options. The first thing you notice about Batman is the option to play the game in normal mode or to add 10 extra coins to your spin and play the Bonus Bet mode. By activating the Bonus Bet the scatter batarang symbol becomes a bonus scatter symbol, three of which from left to right triggers the Descent into Madness feature.

The graphics from this game seem to be lifted from Jim Lee/Scott Williams art of the early 2000’s, which gives the entire game a dark and brooding feel. However, the general lack of background music almost detracts from the game. The feel could only be enhanced by perhaps the theme music from the early 90’s cartoon. 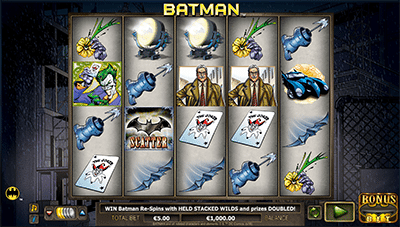 The Batman symbol acts as a wild in both the normal and bonus bet modes. It appears stacked on reels two, three and four. All wins with a Batman wild symbol are doubled.

In normal mode, the scatter batarang symbol pays left to right. But in bonus mode the scatter symbol becomes a bonus symbol, three or more of which from left to right triggers the descent into madness feature. 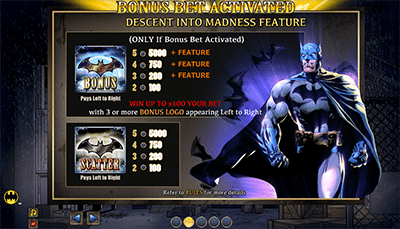 Once triggered, this feature takes you into Batman’s point of view as he battles to quell an escape bid by the Joker from Arkham insane asylum. You must throw the batarang at running inmates. Each inmate you hit rewards a cash prize. Once you have hit several escaping inmates you must throw your batarang and hit the Joker three times to win up to 100 times your original bet.

Once triggered reels two, three and four become blank, with the bat signal search light drifting between the three reels. It will stop on one reel and for the next three re-spins, that reel will feature a held stack of Batman wild symbols. What’s better is the Batman re-spin bonus can be re-triggered during your three free spins.

Batman is a stunning game, NextGen have outdone themselves capturing the feel and mood of Batman. The bonus bet feature adds another dimension to the game: another level of excitement. Stacked wild symbols on 50 paylines opens the doors for some massive wins, which is always great to see.

You can try out NextGen’s Batman pokies for real money or for free in practice play mode at several of our recommended online casino sites, such as SlotsMillion.com and GDayCasino.com. Each site offers no download, instant-play functionality, meaning you don’t have to download anything and can simply play the game via your Web browser (Chrome, Safari, Firefox, etc).