Several software developers have jumped on board the vampire trend of late, with releases like Immortal Romance and Dracula, but NetEnt’s game Blood Suckers is a stand out of the vampire slot series, using fun animation that captures the eerie vampire/horror genre but also has a quirky edge of its own.

Since the Twilight hype of the late 2000’s, it’s all about vampires, vampires, vampires. Even though the Stephanie Meyer series was more about romance than it was about the un-dead, the Twilight Saga sparked a huge revival in this gothic mythical creature. Blood Suckers is the epitome of vampire-themed online slots.

How to play NetEnt’s Blood Suckers

Blood Suckers is a five reel, three row, 25 payline pokies game from NetEntertainment, with a significantly high payout percentage of 98%. There are multiple bonus features which during our testing were able to be triggered pretty regularly and made Blood Suckers a thrill to play.

Wagering details and game specifics for Blood Suckers are as follows: 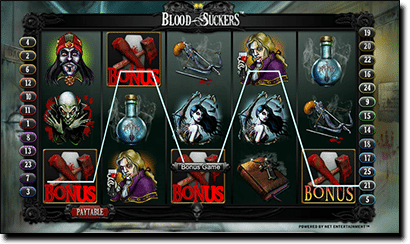 Blood Suckers comes with all kinds of customisable features including the ability to turn on/off the soundtrack or ambient sounds, view your game history and has an auto-play feature that allows you to play up to 100 spins without having to reset your bet each time.

Blood Suckers uses an ideal blend of chilling horror themes and fun animation, with symbols made up of all the classic vampire swag from coffins, garlic bulbs, bleeding fangs, wooden stakes and holy bibles. The gothic design is blended perfectly with a cartoony vibe, as NetEnt released Blood Suckers as a slot game to attract the younger, more recreational players to try online pokies and the result really paid off for all punters. This game has some fun, relatively easy to activate bonus features that are more like interactive video games than casino games. 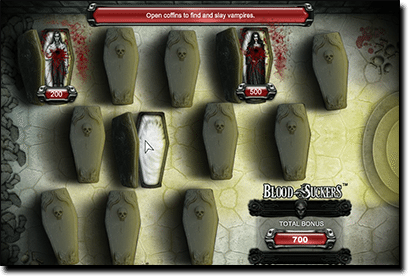 Vampire Slayer Bonus Game – An appearance of three or more of the wooden stake bonus symbol will trigger the awesome Vampire Slaying bonus feature, taking you to a new haunting screen full of a dozen sealed coffins. During this bonus game you get to click on the coffins to reveal what’s hiding inside. If a vampire comes out, you slay them, winning cash for your kill. However, three of the coffins are filled with nothing but bats and dust and if you open one of these empty coffins you’ll end the bonus game.

Wild symbol – the Vampire Bite wild is easily identifiable and when it lands on the reels the animation springs into action, with a close up of a vampire taking a hefty bite out of a lady’s neck as blood drips from his fangs. The wild symbol substitutes all other symbols to form a winning combination, excluding the scatter and bonus symbols.

Free Spins – free spins in Blood Suckers can be triggered by the Vampire Bride scatter symbol, the crazed woman in a veil with blood all over her. An appearance of three of more of the Vampire Bride scatters anywhere across the reels with award ten free spins, with all wins during free spins receiving a x3 multiplier. Free spins can also be re-triggered during this bonus feature with an additional appearance of three scatter symbols.

Where to play Blood Suckers online

As one of Net Entertainment’s most popular pokies titles since 2009, you’ll find Blood Suckers at several of our recommended casinos including those listed in our casino table above.

Follow our links to take advantage of welcome bonuses at these safe pokies sites, each which accepts deposits in multiple currencies. You can also try Blood Suckers for free in demo mode before committing to place a real money bet.

Yes, the vampire theme has been done (some may even say over-done) but Blood Suckers is the real deal. We love this game for its authentic use of horror themes, ghoulish vibes and classic vampire mythology but with that special NetEnt blend of cartoon animation. Blood Suckers is genuinely creepy, but at the same time kind of feels like you’re watching an old school episode of Scooby Doo and for that it definitely gets our tick of approval.

It’s hard to fault a game that feels like its throwing bonuses at you, which is what appeared to happen during our testing, as it was never too long between bets before free spins were awarded or the kick ass Vampire Slayer bonus feature was triggered. The Vampire Slayer bonus is a hoot to play, leaving you on the edge of your seat with each coffin you unveil and really gives you the chance to boost your winnings, so Blood Suckers is worth a try for that bonus alone.

Far removed from the romantic fluff of Twilight, Blood Suckers brings us back to the day where vampires meant gore and terror which definitely gets the OnlineCasinoSite seal of approval. Try it at one of our recommended real money casinos today.