Created by NextGen Gaming, Cash Stampede is a fun 243 Ways online pokies machine with an of array free spins and re-spins. Released in September 2015, it’s quite a dramatic slot thanks to the high-quality graphics and audio themed after an animal stampede.

How to play Cash Stampede

Cash Stampede employs 243 ways to win across 5 reels and 3 rows, and the reels are set on a purple/grey sky backdrop with cracked desert plains. Overall the reels are quite stunning, and each symbol seems to glow. 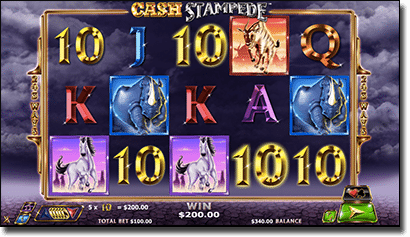 We open with a Power Ranger type theme song, almost indicating these herd of animals are superheroes, but once it calms down we are greeted with more of a video game soundtrack. Regardless, the sounds create a suspenseful ambience, which we think is what NextGen are going for.

NextGen have made this slot compatible on desktop computers and laptops and mobile devices like smartphones and tablets, meaning you can also play on-the-go on the latest Apple iPhone 6s, any Android device, Blackberry, or even Windows portable devices. 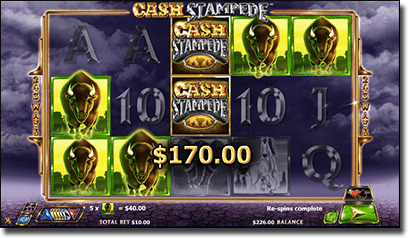 Cash Stampede doesn’t include multipliers, but there are two other bonus features.

Our thoughts on Cash Stampede

We aren’t too sure about the theme, because why a herd of animals would be stampeding for cash that they don’t need just doesn’t compute with us. However, the graphics are executed smoothly and we find that the slot regularly pays out to keep our balance steady until we trigger the bonuses.

The Re-Spins feature is activated quite easily – we managed to do it a few times – and re-triggering the Re-Spin during the feature is easy thanks to the Wild symbol sticking around. We also got a big payout in accordance to to our wager by spinning another Wild during the Re-Spin.

The Free Spins feature is a lot harder to trigger and we don’t think eight free spins is very generous anyway so we have to say we prefer the Re-Spins feature.

We also played it on our smartphone and found it to run quite smoothly, which sees this slot checking all our boxes.

Where to play Cash Stampede

You will find Cash Stampede at our number one video slot provider Slots Million Casino, which also offers a stellar mobile casino with a large range of mobile titles, including Cash Stampede. For more great online slot games, check out our online slots review page.