Castle Builder was released in 2014 by Vienna based software developer Rabcat and rolled out over the Microgaming/QuickFire platform, fast becoming a popular player favourite.

Try Castle Builder by Rabcat at these Microgaming casinos

Castle Builder is a highly advanced slot game as far as content and gameplay features go, using a progressive story format where the player has the chance to level up and unlock achievements, bringing not just more ways to win but more fun and excitement along the way.

How to play Rabcat’s Castle Builder

Castle Builder is a five reel, 15 pay line pokies game with several additional features. It uses a medieval theme and a unique format where the player assumes the role of a master builder, thrust into one of four fictional monarch kingdoms, Forana, Ethril, Ilrian and eventually, Empire.

The aim of the game is to make your way across the lands (moving across the medieval map as you go), finding construction parts hidden within the reels in order to build castles before moving on to the next kingdom. Along the way you’ll encounter knights, kings and princesses, vying for the attention of many beautiful admirers. 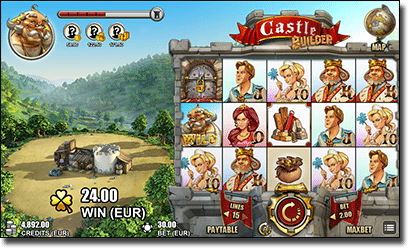 Aside from winning money, the aim of Castle Builder is to construct 10 castles in each kingdom. Each completed castle kicks off a bonus round, which is your chance to level up and earn more valuable rewards. The games bonus features are:

For every five castles you complete, you’ll also be rewarded with an achievement medal, with a different payout awarded upon the presentation of each.

Where to play Castle Builder online

Although Castle Builder was developed by Rabcat, the game was released in partnership with Microgaming so you’ll find it at all Microgaming powered casinos along with many other reputable casino sites including the following:

These secure casinos not only accept wagers in AUD but also allow you to try Castle Builder for free in demo mode before committing to any real money bets.

When playing Castle Builder, it’s easy to get so wrapped up in the advancing nature of the game that you can forget you’re playing a casino game. The dollars can easily rack up while you’re focused on getting that next piece of building equipment to construct your castle or hoping to move onto the next chapter of the map.

Depending on your personal preference, that will either be the huge draw card or the deal breaker for Castle Builder. Players who love level-up style video games will easily fall in love with this game, while more dedicated pokies players might find all these extras a distraction from the main focus of earning the big bucks.

Regardless, Castle Builder is a must try game for all online casino punters as there’s nothing else quite like it currently available (NetEnt’s Steam Tower is along the same realm but not quite on the same level). The unique format and innovative gameplay features needs to be experienced at least once, while for some it will become the go-to game for more adventurous video game style play.