With the inundation of hilarious cat videos on the Web, we can’t help but have a soft spot for the feline variety – which is why we aren’t questioning Catsino pokies by Rival Gaming. Featuring high roller cats in a casino, bright graphics definitely jump off the screen. Whether or not the features are worth your real money wagers is another question, which we are here to answer.

How to play Catsino

Catsino features 5 reels and a huge 50 paylines with just four coin sizes to choose from. You can have as little as one payline activated and as many as the entire 50 – recommended for the best payouts.

There’s also 10 coins available to play, but the more coins the better the payouts.

When the title is first opened an introductory video featuring stereotypical casino players – such as the mafia, females on the pokies, suave guys on the tables, and more – all represented by cats. This is quite comical and worth watching if you are a fan of the feline kind. 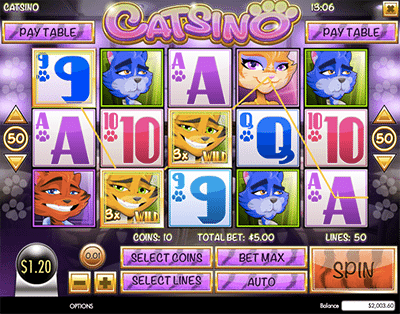 There’s an old school jazz soundtrack accompanying the reels which can put you in the mood for gaming, but if you prefer silence you can mute it via the options button. You can also change the graphical resolution if you’re Internet connection is a bit slow.

While the feline themed pokie is filled with kitty cats, there’s also the inclusion of the 9, 10, J, Q, K, and A symbols which represent the lower payouts. These symbols have been redesigned to appear like cards with paw prints on them – which is quite fitting. The top payout for the lower paying symbols is 100 coins, won by spinning five A symbols.

The middle value symbols are represented by the blue cat, the female cat on her phone, the red/orange cat, and the purple female cat with a drink, with the latter paying 500 coins when you spin five of a kind.

The higher paying symbols are represented by the female orange cat, the blue chip with a paw print on it, and the stack of cash, with five cash symbols scoring you the top payout of 1250 coins.

There’s two other symbols to keep an eye out for too.

There’s two bonus features to Catsino, though they’re quite similar.

Our thoughts on the Catsino slot game

It didn’t take long to trigger the free spins. However, while the Wild multiplier is quite generous, it isn’t guaranteed to complete a winning payline on every spin so it isn’t actually that great of a feature. Additionally, we didn’t win much when we triggered the free spins the first time unfortunately.

After we triggered the free spins the first time, it was hard enough to trigger them again let alone trigger the Nine Live Super Round. But when we did we did win a fair amount. The 3x multiplier on Wild wins in the base game does somewhat make up for this too, as we did score some substantial wins.

Overall, this online pokie isn’t the best we’ve seen but if you are a feline fanatic and after some Wild multiplier wins you’ll enjoy this title by Rival Gaming.