In this exciting progressive jackpot pokies game, Playtech brings Marvel Comics legendary story of Daredevil to the reels, featuring free spins, a special bullseye bonus game and the chance to win a base jackpot starting at a cool $100,000. Find out how and where to play Daredevil for real money bets at the world leading online casinos.

How to play Daredevil 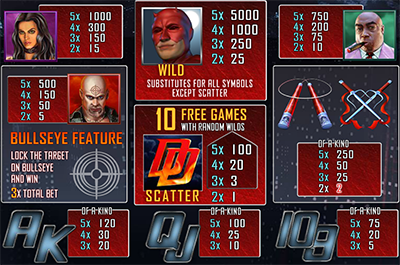 Daredevil is a Flash pokies game that’s available for instant-play directly over your Web browser without having to download any special software. While most slot games can be sampled for free in practice mode, Daredevil requires real money bets to play due to its progressive jackpot format.

It’s a five-reel, three-row game with 20 unfixed paylines. The specifics of Daredevil are as follows: 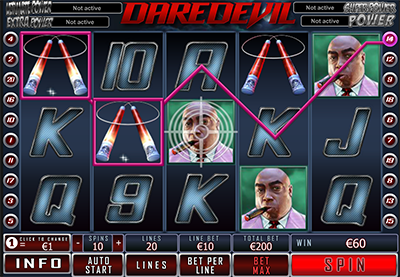 Daredevil also offers an easy max-bet button as well as an auto-play feature that allows you to pre-set the computer to play up to 99 spins on your behalf.

Marvel’s Daredevil comic follows the story of Matt Murdock, who was blinded by radioactive waste as a child, causing him to grow up with heightened senses and a superhuman sharpness. By day he works as a lawyer, but by night he guards the New York district known as Hell’s Kitchen, fighting such villains as Bullseye, Elektra and Murdoch, each of whom is featured in this Playtech pokies game. Daredevil himself works as the game’s wild symbol, which substitutes all other symbols to form a winning combination except for the scatter. The scatter is the flame covered Daredevil (DD) logo, which is responsible for triggering free spins.

The four-tiered progressive jackpot starts with these base amounts:

Where to play Daredevil for real money

Playtech pokies can be found at one our top-rated online casinos, Casino.com, which is legally licensed by the Gibraltar Betting & Gaming Association to accept players from Australia.

Casino.com offers a user-friendly instant-play format for all computer and mobile makes and models, as well as a downloadable casino client for PC users. With plenty of safe AUD deposit options available, including Visa, MasterCard, Neteller, POLi and Paysafecard, it’s easy to play Daredevil for real money, with most deposits processed on the spot.

If you like the Daredevil pokies game, Casino.com offers plenty of other Marvel pokies, including X-Men, The Incredible Hulk, Fantastic Four and many more.

Daredevil is a few years old now, so it might not tick all the right boxes if you’re looking for a pokies game using the latest in 3D animation and graphics, but it still looks pretty god and holds up against the test of time. If you’re a Marvel fan, you’ll froth over Daredevil, and if not, the chance to strike it rich on that alluring progressive jackpot is sure to keep you entertained.

Sign up to play Marvel’s Daredevil pokies game at Casino.com to receive up to $400 in bonus credits when depositing real money for the first time.