Drive: Multiplier Mayhem takes us to the streets for a real money drag race and while this real money pokies game has ticked all the boxes when it comes to an exciting theme, graphics, and effects, we are here to find out if it can get over the finish line with its gameplay features, too.

How to play Drive: Multiplier Mayhem

Drive: Multiplier Mayhem is a 5 reel and 15 payline title set in the back streets in the middle of the night with the bright lights of the city and the cars lighting up behind the three rows.

A cool little feature to the pokie is the car, positioned on the side of the reels, moves up and down while you play. Additionally, the graphics are beautifully crafted to create a stunning pokie – what we have come to expect from Net Entertainment. 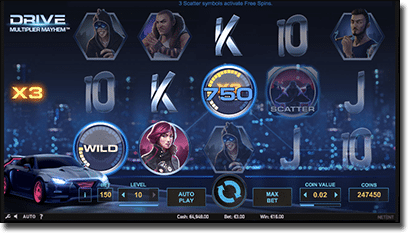 The soundtrack seems more fitting to an alien-invasion type themed pokie, but it does create some suspense. You can mute the audio via the icon in the bottom left hand corner if you prefer your own background noise.

Additionally, Max Bet and Auto Play options are both available to speed gameplay up.

NetEnt must have had a mind blank when it came to filling the symbols on the reels as they’ve gone with the traditional symbols for the lower value symbols instead of car themed symbols.

Spin at least three 10, J, Q, K, or A, symbols to receive a payout of five coins, or a maximum of five for the top payout of 50 coins – usually a winning A combination pays higher than a winning 10 combination but not in this case.

Scatter: The Scatter symbol is the three shadows, coloured purple, and at least three activate the Free Spins feature.

Bonus symbol: The Bonus symbol is the Nitro symbol, which only appears in the Free Spins feature, and you need to collect these to activate the extra Bonus round.

The bonus features are quite unique on Drive and incredibly generous if you manage to activate them. 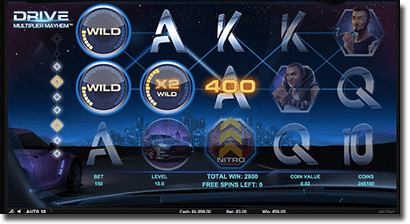 Free Spins: Spin at least three Scatter symbols to activate the Free Spins feature, where you will instantly be awarded 10 free spins. The Nitro Collect Metre will appear here for you to have the chance to activate the extra feature. What’s more, Wild Multipliers appear here too.

Nitro Collect Metre: When the free spins commence, a Nitro Collect Metre will appear and you need to fill this to get to the next race level to verse a new opponent and receive more Multiplier Wilds and more free spins. To fill the metre, you just need to spin three Nitro symbols, and the earlier you spin them, the more spins and Wilds you will receive, as follows. 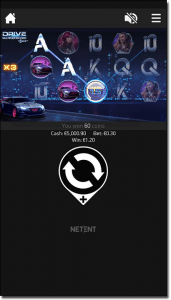 Net Entertainment have also released the pokie in their Touch series, meaning we can access Drive: Multiplier Mayhem via our smartphones and tablets. The best mobile devices to use for playing Drive and other NetEnt mobile-optimised pokies are:

The graphics aren’t on par with the desktop version – the car doesn’t bounce up and down – but there are lights and effects to make it still feel quite animated.

Additionally, we can’t help but feel NetEnt could make use of the screen space instead of jamming it into the top half of our Apple, Android or Windows devices.

As we mentioned above, we are quite impressed by the graphics, specifically on the desktop version. Even if you aren’t a car enthusiast, the animations keep you captivated – especially the electrical sparks on the car as you score a big win.

When it comes to the base game, we are somewhat disappointed as the payouts aren’t huge with the regular symbols and we are left to rely on the Wild Multipliers – however these are a welcome addition especially when more than one shows up in a winning combination.

The Free Spins feature on the other hand is incredible, and while it took some time to activate it, when we did the reels transformed and we were greeted to three Nitro symbols before the spins ran out, meaning we got a lot of additional free games. This happened twice and as such we scored a huge 2800-coin payout due to the guaranteed Multiplier Wilds appearing.

Overall, we recommend getting behind the reels of this pokie thanks to the Free Spins feature and captivating graphics from Net Entertainment.