Esqueleto Explosivo is one of the leading games from Swedish software developer Thunderkick, and it’ll have you hooked from the moment those hilarious, quirky sugar skulls drop down across the screen. Our review covers its gameplay, Mexican aesthetic and cash prizes.

The game follows the aptly named Mariachi band Enrico Mortis and The Boners as they celebrate the Day of the Dead (Dia de los Muertos), a highly revered Mexican festival that honours the memory of those who have passed. With fireworks exploding in the background, lanterns, candles and fireflies twinkling overhead and the sweet, sweet tunes of The Boners serenading you every moment of the way, Esqueleto Explosivo is an absolute must-try.

How to play Thunderkick’s Esqueleto Explosivo

Esqueleto Explosivo is a five reel, fixed 17 pay line pokies game that features dropping symbols, exploding wilds and one mean multiplier bonus. The format is really simple, all you need to control is the amount of money you want to bet for each spin and press the play button, there’s no need to adjust coin sizes or pay lines. An auto-play button also allows you to play anywhere from five rounds to 5,000 rounds without having to move a muscle.

Thanks to Thunderkick’s user-friendly software players can also customise elements of the game we don’t usually see from other providers, allowing you to adjust the game graphic quality, sound effects and various other settings from one simple main menu.

The specifics of Esqueleto Explosivo are as follows: 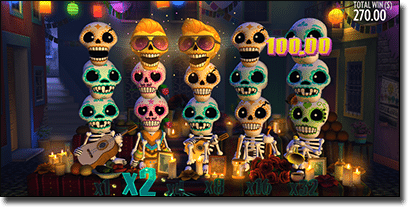 One of the first thing you’ll notice about Esqueleto Explosivo (other than how incredible it looks and sounds) is the unique dropping symbol format. We have seen similar styles to this in other games, often referred to as cascading symbols or avalanching symbols (think NetEnt slot Gonzo’s Quest) but never executed with quite the same pizzazz as in Esqueleto Explosivo.

Where to play Esqueleto Explosivo for real money

Thunderkick is a relatively new software provider on our radar so you won’t find Esqueleto Explosivo at as many as our recommended casinos as you would software bigger names like Microgaming or NetEnt.

Thankfully this awesome slot game is available at two of our all-time favourite pokies sites, both which accept deposits in over a range of secure payment methods like Visa, MasterCard, Neteller, Skrill, and Paysafecard.

Play Esqueleto Explosivo along with Thunderkick’s other slot games like Sunny Scoops, Barber Shop, Toki Time and Birds on a Wire at any of the reputable online casinos listed in our casino table at the top of this page. These casino sites give you the option of trying Esqueleto Explosivo for free in demo mode before moving on to play for real money. Follow our links to these casinos to take advantage of welcome bonuses, or read our detailed reviews of each site.

Esqueleto Explosivo gets two huge thumbs up from us, on every level. From the magnificent graphics, to the jovial music, to the sublimely lovable skeletal characters, this is the kind of game you can play time and time again and not tire of it. Plus, the wins seem to just keep on coming, making it not only rewarding in entertainment value but profitable too.

The Mucho Multiplier feature adds extra pleasure to an already highly enjoyable gaming experience. One thing we would have loved to see is an additional bonus game, purely to see what other kind of adventures Enrico Mortis and The Boners might get up to, but you can’t have it all.

If you’re used to the standard slot format Esqueleto Explosivo may confuse you a bit at first but it won’t take long to get the hang of it and once you do, you’ll reap the rewards. Do yourself a favour and try this game, but make sure to have the volume up to enjoy every moment of the lively Mariachi tunes and pure entertainment of the vocals of Enrico Mortis and The Boners.

Pour yourself a margarita and join the Day of the Dead celebrations with Esqueleto Explosivo at Slots Million today. For more great online slot games, check out our online slots review page.