Are you a lover of all things kawaii? Do you like your slot games on the adorable side? You’re going to love Fa Fa Twins, the latest 3D pokies game from Betsoft, using a Japanese design themed around two cute-as-a-button twin girls. Offering a 243 Ways to Win format, Double Up bonus game and a unique Dual Reels feature, Fa Fa Twins is an exciting game with a light-hearted touch. Read on to find out how to play Fa Fa Twins for real money bets at the best online casinos.

How to play Fa Fa Twins 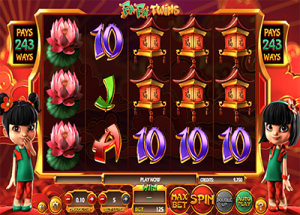 Fa Fa Twins is a five-reel pokies game that’s available for instant-play with no downloads required at all leading Betsoft supported online casinos. To play for real money, head to a trusted Betsoft pokies sites like Slots Million or House of Jack, sign up for an account and make a real money deposit using a trusted payment method like Visa, MasterCard, Neteller, Skrill, Paysafecard or direct bank transfer. Fa Fa Twins can also be sampled at these top-rated casinos for free play in practice mode, so you can try this slot game first before deciding if you want to risk any real cash wagers.

This is a 243 Ways slot game, which means there are 243 possible winning combinations with each spin. All wins pay left to right, with the longest winning combination awarding payouts after each winning spin. To play, set the size of your coin and bet level using the coins at the bottom of the reels then hit the spin button. Any wins will be automatically credited to your online casino account.

The game specifics of the Fa Fa Twins pokies are as follows:

An auto-play function is also available, where the computer can place up to 100 spins on your behalf, but the best online pokies strategy advises against using the auto-play function unless you want to burn through your bankroll at a rapid pace.

Fa Fa Twins uses a Japanese kawaii inspired theme, with the reels set against a red background, which is deemed to be a lucky colour in Japanese culture. The two adorable Fa Fa Twins stand to either side of the reels, ready to chuck a peace sign up to celebrate after any winning spin. The games Japanese inspired design uses high paying symbols like koi fish, lotus flowers, maneki neko cats and lanterns, side by side with lower paying A-K-Q-J-10 symbols with an oriental twist.

This is an odd game in that there is no scatter symbol, which means no free spins are on offer. The biggest winning potential lies within the following bonus symbols:

Fa Fa Twins is an interesting one in that it excels in some regards and falls back in others. For example, we love the 243 Ways format (which is rare in Betsoft games) and the unique Dual Reels feature, and the Double Up bonus is a good spin on the standard gamble feature. But the lack of a scatter symbol, free spins or a separate bonus round is odd, as these are features we have come to expect from Betsoft games.

Either way, Fa Fa Twins is a very adorable game and the bonus features it does offer provide plenty of entertainment and winning potential, so you can add this to the ever-growing list of successful Betsoft creations.

Sign up to play Fa Fa Twins and other BetSoft slot games at any of our recommended BetSoft casinos in the table above, where new players can claim some excellent sign-up bonuses when depositing for the first time.