Instead of releasing a brand new pokies game with a Christmas theme, Net Entertainment has released re-decorated versions of pre-existing slots, including Flowers: Christmas Edition. So while the reels are frosted over and some symbols have been decked out to suit the festivities, we are essentially reviewing the original Flowers.

How to play Flowers: Christmas Edition

The original, brightly-themed slot, Flowers, has been iced over and decorated appropriately for a white Christmas. The format is the same as the original, featuring 5 reels and 30 paylines, as is how to play, but the symbols have been snowed on and some even appear to look somewhat different. 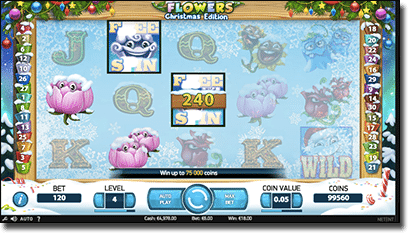 The original Flowers slot is meant to be fun and light-hearted and they have stuck with this ambience in the Christmas edition, especially via the stunning christmas graphics around the reels and the original sound effects upon each spin and win.

The traditional A, K, Q, and J symbols have been included again as the lower value symbols, each featuring a touch of snow to their exterior. The maximum you can spin with these symbols is 200 coins, done so via five A symbols.

The middle value symbols are the flowers, which have also been covered in snow (how they’ve survived we have no idea). The maximum available amount to win on these symbols is 2000 coins, but you do need to spin 10.

There aren’t many bonus features to Flowers: Christmas Edition, but there are as many as the original version – and they’re exactly the same.

There are up to eight Scatter symbols available due to the inclusion of the single and the double Scatter.

As such there are a huge amount of free spins on offer with varying multipliers both dependant on the number of Scatter symbols you spin, as follows;

You can also re-trigger free spins during the Free Spins feature via single and double Scatters.

Our perspective has been quite clear throughout this review – Flowers: Christmas Edition is exactly the same as the original Flowers, it just features a Christmas theme. 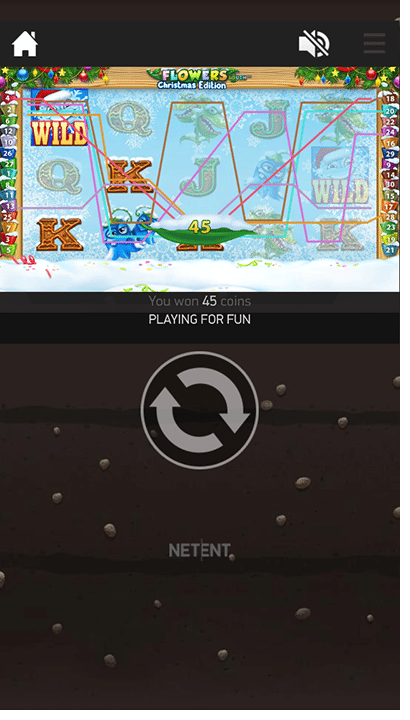 We aren’t overly angry at this as Flowers is quite a generous slot, specifically with the payout rate and the number of Free Spins on offer, but it would’ve been nice if they could’ve included another bonus feature to change things up a bit.

Net Entertainment have optimised a large range of their slot machines for smartphones and tablets (Apple, Windows, Android, and other branded devices) including Flowers: the Christmas Edition. We thought this may have given the festive edition an edge, but the original Flowers is also available on the HTML5 platform.

The theme is executed well, besides the weird fact the flowers survived the snow, and it is fun to play themed slots during the festive season, but overall we are a little disappointed there isn’t something new here.

If you feel like getting in the Christmas spirit, however, and enjoy the original Flowers this is worth a spin.