This intriguing new slots game, released by Microgaming in early 2015, is the latest in the collection of King Arthur fanfare, bringing the tale of The Path to Valor to life in pokies format using a somewhat eerie soundtrack and foreboding graphics.

Try Forsaken Kingdom for real money at these Microgaming casinos

Fans of the medieval and fantasy genre will surely be familiar with the legend of King Arthur and the Knights of the Roundtable, a story so famous it’s been the basis of several interactive games over the years.

If knights in armour, sword fights and beautiful Victorian women set upon ominous European landscapes are your cup of tea, you’re in for a real treat.

Forsaken Kingdom is available at several leading online casinos, where new players can take advantage of awesome real money welcome bonuses to get the full Forsaken Kingdom experience. Our recommended venues to take Forsaken Kingdom for a spin are listed in our casino table above – use our links to sign up directly or read our detailed reviews of each site.

These casino sites are amongst the most reputable online gambling venues in the business, both offering a range of secure deposit options for real money players. Each uses the latest in SSL digital security encryption to ensure player safety is protected at all times.

Can I play Forsaken Kingdom slots on my mobile device?

Unfortunately, Rabcat-developed games currently aren’t available on mobile smartphone and tablet devices. Online pokies often require optimisation and additional development time when porting a version to fit the touch-based, smaller screens of smartphones and tablets, but Forsaken Kingdom and other popular video slots by Rabcat will most likely be available at our recommended casino sites and their mobile casinos in the near future.

Forsaken Kingdom is a five reel, three row, 20 pay line online pokies game created by Rabat Gaming and powered by Microgaming. The minimum bet per spin is .01 with a maximum bet per spin set at $40 and a jackpot of 1000X. The game has a RTP of 96.54% and is available in 23 languages. 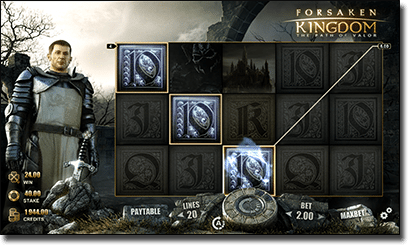 Using striking cinematic style graphics and dark sound effects, the player assumes the position of the heroic King Arthur on his quest to gather the Knights of the Roundtable and save the woman that he loves. The handsome King Arthur himself stands to the side of the reels among castle ruins, ghostly trees and a brooding sky, letting out a triumphant cheer when a winning spin lands.

You’ll also notice that around the spin button there’s a ring of stone with twelve empty spaces. This becomes part of one of the games bonus features, explained in more detail in the upcoming bonuses section.

The game is made up of medieval style symbols including misty castles, swords, shields and the grim reaper like Dark Knight. The dark and spooky atmosphere is what gives Forsaken Kingdom its appealing edge, making this game one of the better fantasy slot games available online.

Wild symbol – Lady Guinevere, the beautiful woman in red is King Arthurs love interest and also the games wild symbol. She only appears on the third reel and will expand to fill the entire reel to form a winning combination.

Scatter symbols – the shield is the games scatter symbol, and is responsible for triggering two of the incredible bonus features.

There are four exciting bonus features in Forsaken Kingdom, which after the striking graphics is the biggest draw card of this game. The bonus possibilities are so epic that even those who prefer more vibrant, upbeat games are sure to flock to Forsaken Kingdom for a go at a big bonus win.

As far as capturing that gloomy yet romantic and masculine medieval atmosphere, this game sure hits the nail on the head. The cinematic quality of the 3D graphics and superb animation make it a feat for Rabcat and Microgaming, making it a strong addition to a collaboration list that includes recent hits like Castle Builder and Dragon’s Myth.