BetSoft is the leading software developer when it comes to unique 3D pokies, which is why we were so eager to review their game, Frankenslot’s Monster.

Released in April 2016, this pokie clearly takes inspiration from Mary Shelley’s favourite monster, Frankenstein, and since it is part of the Slots3 line, graphically we are expecting great things.

How to play Frankenslot’s Monster

Featuring 20 paylines across 5 reels, BetSoft have stuck with their usual format and layout with Frankenslot’s Monster, as the reels are placed on top of a unique setting – this time an underground lab. The characters, including what looks to be Victor Frankenstein, are situated besides the reels where the monster is tied to a vertical table.

There is a playful feel to the graphics, which does seem to branch away from the Gothic genre the book offers – perhaps a feel BetSoft prefer to avoid, instead keeping things light. They have been crafted incredibly well however, utilising 3D technology to really capture and immerse the player – even the graphics surrounding the bet size and spin button have been designed to fit in with the theme. 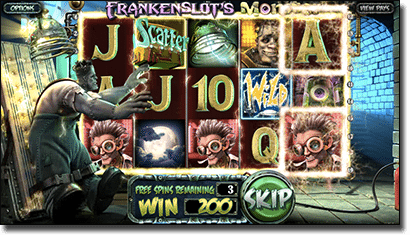 The audio is suspenseful and ties in well with the theme, plus regular grunts coming from the monster and thoughtful sighs from his creator – you can mute this via the ‘options’ button in the top left hand corner however.

The traditional 10, J, Q, K, and A symbols have been used to represent the lower value symbols, with the maximum amount available to win set at 100 coins by scoring five A symbols.

The middle value symbols include a scary looking light with bolts of energy coming out of it, an eye in a jar, and the moon peeking out from behind some clouds, with the top payout of these symbols set at 300 coins by scoring five moons.

You can view the rest of the payouts by clicking the ‘view pays’ button in the top right hand corner, but be sure to keep an eye out for the following symbols too.

There are a number of bonus features to BetSoft’s pokies including free spins, the chance to double your winnings, and more. 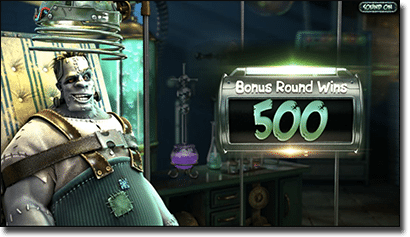 Free Spins: Land at least three Scatter symbols and you will earn eight free spins. On every spin, between one and three random symbols will turn Wild. What’s more you can re-trigger the Free Spins feature and earn an additional eight free spins.

BetSoft always deliver when it comes to the themes, though they could mix things up a bit by placing the reels and their characters in different positions – or even opting for a ways to win format instead of paylines.

The features aren’t overly impressive – the bonus round is with up to 25x your bet available to be won, but just eight free spins for the Free Spins feature is a bit disappointing. While you can re-trigger, we didn’t manage to – but the extra Wilds are a great addition.

We wouldn’t count the Double Up as a Bonus round as it is simply the Gamble feature, which we advise avoiding unless you want to risk your winnings.

Where to play Frankenslot’s Monster

Apple, Android, Windows and other smartphone and tablet users can play Frankenslot’s Monster on their portable device. The title has been optimised for HTML5, meaning it is compatible with mobile devices and you can access it at the mobile versions of our recommended online casinos.

You can find Frankenslot’s Monster at both desktop and mobile versions of Guts.com – click or tap the links to sign up if you aren’t a member yet and opt in for $400 welcome bonus on offer.