Game of Thrones is the biggest television show to come out of the 2010s to date, with its dark-fantasy setting and dirty medieval political intrigue enticing viewers around the globe – so it’s only natural that Microgaming, the best online gambling software studio, has made an equally enticing online pokies game based on and faithful to the show.

Play Game of Thrones slot at the best online casinos

If you’ve never heard of Game of Thrones you may have been living under a rock for the past few years, as GoT has been one of the most prominent pop culture phenomena’s of recent times. What started out as a fantasy novel series A Song of Ice and Fire written by George R. R. Martin has become one of the most popular HBO TV shows of all time.

Never one to miss out the chance to be part of the excitement, Microgaming has released a Game of Thrones pokies game that celebrates this epic series, bringing the mystique of Westeros and Essos to life in a sophisticated game setting.

How to play Game of Thrones

Game of Thrones pokies is available in two different formats – 15 paylines and 243 ways. The game specifications listed below are based on the 15 payline version, but are mostly the same for the 243 ways game other than some slight differences to the coin sizes and jackpots. 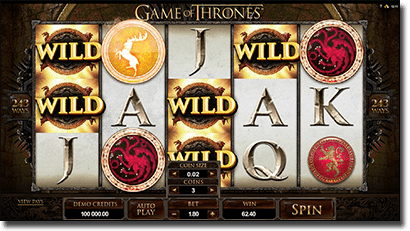 The Game of Thrones pokies game is made up of iconic symbols from the TV series and features a few short video sequences, but you won’t find any images of your favourite characters. Symbols are instead made up of banners from the four different houses (Baratheon, Lannister, Stark and Targaryen) and have the power to trigger some pretty awesome bonus features.

Where to play Game of Thrones for real money

As the Game of Thrones slot is a Microgaming creation, you’ll find it at a majority of leading online casinos. Some of our favourite venues to play GoT for real money are listed in the casino table at the top of this page. These casinos have all undergone our thorough testing process before we recommend them to players – you can read our detailed reviews in our links above.

Game of Thrones has also been optimised for mobile play, so you can try it out on your iOS or Android smartphone or tablet at any of the mobile casinos mentioned above. You can play the Game of Thrones pokies game for free in demo mode or for real money bets, with all payment protected by a minimum of 128 Bit SSL (Secure Socket Layer) encryption security.

OnlineCasinoSite’s verdict on Game of Thrones

Game of Thrones pokies stands on its own merit so you don’t have to be a fan of the books or TV show to enjoy it. While some loyal fans may be disappointed by the lack of appearances by the real characters, it’s actually this lack of real screen grabs that will make it more appealing across the board.

The result is a sophisticated and engaging game that provides enthralling gameplay whether you know your Lannister’s from your Stark’s or not. The power to choose between different free spins rounds and the innovative gamble feature adds a lot of appeal to this game and we love that you can choose between the 15 payline and 243 way game.

In short, Game of Thrones is a must try online pokies game. You’ll find it at a majority of our favourite casinos where you can also take advantage of great welcome offers when signing up for the first time.