Who else would we trust but the brains down at Net Entertainment to bring us an online pokie of the Guns ‘n’ Roses? NetEnt have created a pokie that is like being at a Guns ‘n’ Roses concert, complete with screaming fans and an authentic playlist.

Guns ‘N Roses are one of the most successful and influential bands of the last 30 years. They have sold more than 100 million albums throughout their career. They are rock royalty. Living legends, and they’re now immortalised in pokies form.

Guns ‘n’ Roses is a five reel, 20 pay line pokie that can be played for free or real money through one of our favored and trusted online casinos. You can play a minimum bet of $0.20 and a max bet of $200 which allows for

When playing Guns ‘n’ Roses in the bottom left hand corner of the screen you can choose from five of Guns ‘n’ Roses most famous songs to act as the background music to the game: Welcome to the Jungle, Sweet Child o’ Mine, Paradise City, November Rain or Chinese Democracy. The ability to choose which song you want to listen to while playing is a great little feature of this game.

The screen set up is great with the background presented as a giant stage, complete with lighting and speakers, as if the Roses were playing a concert. At the foot of the screen are hundreds of fans. Whenever you have a win, the crowd goes wild and erupts in cheers and applause while the lighting blinds you. During big wins pyrotechnics fire from the top of the screen: a smart touch to really bring home the mega concert feel of the game. 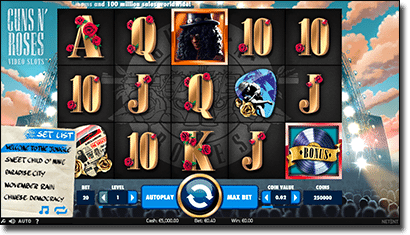 Three bonus symbols on reels one, three and five triggers the bonus wheel, which gives you the opportunity to win credit prizes or one of two bonus games. Once the wheel is spinning, click the stop button whenever you are ready and the wheel will begin to slow down

In descending order of value the symbols are:

The Guns ‘n’ Roses double pistol insignia acts as the wild symbol and can substitute for every symbol except the Bonus symbol during paid plays. Once you have spun up a wild, it will expand to cover the entire reel it is on.

The crowd pleaser bonus game is a three-tiered bonus that takes you to a new screen with eight symbols to choose from. Behind each symbol is a coin prize, plus one pick or free spins. You get three picks per round.

On the left of the screen is a bar. The credit prize you are awarded from each pick contributes to that bar and if after three picks you have reached the level marks, then you move on to the next round of play.

The encore free spins triggers 10 free games. During the free spins one band member randomly appears stacked on reel two, three or four. That band member’s symbol also acts as a wild during that particular spin. This paired with the continuing Guns ‘n’ Roses insignia, expanding wild symbol can add up to some very big wins very quickly.

This randomly triggered feature can land in one of three positions. A wild the shape of an iron cross can appear covering as many as five symbols on the middle of the gaming area.

NetEntertainment have tried to pack the excitement of being at a Guns ‘n’ Roses concert into this game and they have succeeded. With two bonus games and two randomly triggered features and an expanding wild every spin, there’s always the possibility of massive winnings happening. If you’re a rock fan and love Guns ‘n Roses, it’s a definite thumbs up.