Remember when we watched Zeus throw down against Hades in the Legend of Olympus slot machine by Microgaming and Rabcat? Well now Hades is getting one up on Zeus and fighting back, but in his own mischievous way of course in the Hot as Hades slot by Microgaming.

How to play Hot as Hades

Hot as Hades features 20 paylines over 5 reels and 3 rows, with a soundtrack similar to an animation film that is suspenseful but not over powering. You can mute this in the top right hand corner, however.

Every now and then Hades runs out to the reels, clearly up to no good while we spin the reels to activate the bonus rounds. 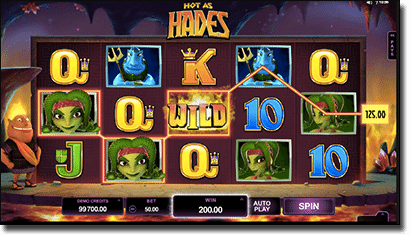 Hades and Zeus are on the reels along with with other brother Poseidon, and the seductive, but evil, Medusa too. Microgaming has also stuck with the lower values symbols of 9, 10, J, Q, K, and A. 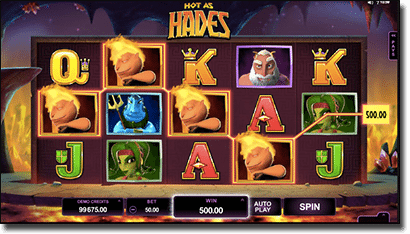 There are the usual Wild and Scatter symbols, though the Scatter doesn’t act in the way that it normally does (it triggers a multi-level bonus round rather than a free spins bonus). Additionally, keep an eye out for Hades on the reels, because if you spin four or more Hades characters you are in for a substantial payout.

Wild symbol: The Wild symbol is the Hot as Hades logo and it substitutes for all other symbols except the Scatter symbols. Additionally, it changes into a burning symbol with the text ‘Wild’ when it completes a winning combination.

Scatter symbol: The Scatter symbol is the glowing bull skull but instead of activating a free spins round, it triggers a multi-level bonus round, requiring at least three to do so.

The two bonus features included in Hot as Hades are quite unique and offer an entertaining way to win.

Quest for the Crystal Helm Bonus: Triggered by at least three Scatters, players are taken to a bonus where you can pick your way through five mini bonuses to win big (which is somewhat reminiscent of the ever popular Avalon slot). The mini bonuses include: 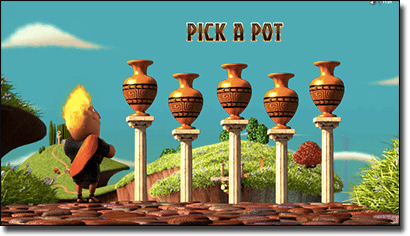 Every mini bonus round has cash prizes that you can pick, but there is also an ‘end game’ option and if you click this you are automatically exited from the bonus round. If you make it to the final mini bonus, the Chamber of the Crystal Skull, you will win big, however.

Super Mode: While the Scatter is busy activating the multi-level bonus round, there are still free spins available. These are randomly triggered throughout the base game and here you will receive five free spins with three Held Wilds and a 2x multiplier that will remain for the entire five free spins.

Other features in Hot as Hades

We have included some of the other features on the Hot as Hades slot including;

Play Hot As Hades for free

Hot as Hades is an entertaining slot from Microgaming and we triggered the multi-level bonus only after a few spins, though we managed to pick the ‘end game’ feature on the second mini bonus level. We still received a substantial payout and it was a unique way to win cash.

Where to play Hot as Hades

Our favourite place to play Hot as Hades is at Slots Million Casino, as it is so easy to find the game and other titles via their slot filter and they offer only the best video slots.