If you’re ready for a unique and retro experience, then Hotline from NetEnt should be the next game on your list. Packed with classic and modern features, it invokes imagery and gameplay that would fit right in as part of an episode of Starsky & Hutch.

How to play Hotline

The graphics that NetEnt provides in all of its games can never be questioned and the same is true for Hotline. It presents a background of what looks like the Miami beachfront, with hotels on one side and the beach on the other. As well as its exterior appearance, there are some other intriguing additions to the game.

The overall layout of this slot sticks closely to the generic video slots design of five reels and three rows. As well as this interface, you have the ability to bet on a total of 30 different pay lines. These are fixed in place, so you cannot pick and choose the number of lines in play per spin.

You do, on the other hand, have the ability to change the value of the wager. This is done by opting for a specific coin value between $0.01 and $1 as well as using the ‘Bet Level’ button to change the amount of coins in play between one and 10. This gives the opportunity to place maximum wagers of $150 per spin (although this can increase to $450 with the Hotline feature).

Hotline Bonus Bet:
The bonus bet feature increases the chance to win expanding wild symbols and re-spins with a higher bet in play. If you activate a single hotline, the game is played with the base bet of 15 coins per bet level. Should you activate two hotlines, then this is doubled. Meanwhile, the bet is tripled to 45 coins per bet level if you activate three. All three hotlines being active will see you placing a bet of $450 per spin. 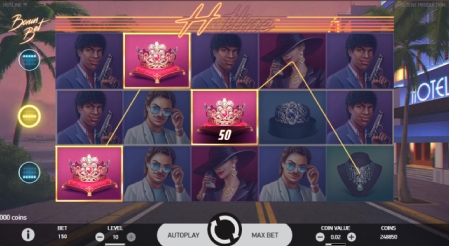 Wild and Expanding Wild:
Wild symbols can appear anywhere on the reels during the main game, free spins or re-spins. They are represented by the flashy red sports car and will substitute for all other symbols upon the reels to help form a win. The only exception to this is the scatter symbol. Should a wild symbol land on one of the activated hotlines, it will expand to cover the entire reel.

Re-Spins:
Should a wild symbol land on an active hotline, it will expand as described above. It will then also award a re-spin. Another re-spin occurs if another wild appears on a hotline, and this continues until the end of the re-spins round.

Free Spins:
The game’s scatter symbol, which depicts a sunset background, works as the trigger for the free spins. If three of these show up anywhere on reels one, three and five during the main game, you get seven free spins. If a wild lands on an activated hotline during this round, it will expand to cover the entirety of the reel and remain there until the free spins are done.

The lower-paying symbols of the Hotline slot come in the form of three different pieces of expensive jewellery: the sapphire ring, the emerald necklace and the ruby tiara. The latter of these is able to pay out a maximum reward of 30 times your in-play stake.

After these, there are three character symbols in the form of undercover cops, Quinn and Rivera, while the female thief, Kitty Weiss, makes up the game’s highest-paying standard symbol. Five of her appearing on a winning bet line will reward you with 200 times your line bet.

If you were a fan of shows like Knightrider and other such offerings in the ’80s, then NetEnt’s Hotline is sure to appeal to you. It’s got all of the retro fun and entertainment in it, whilst also providing a well-made slot too. The inbuilt features are both familiar and innovative, ensuring a great entertainment for all sorts of players.