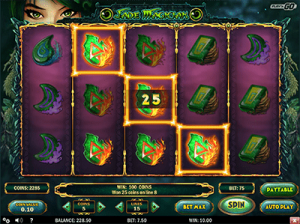 The Jade Magician pokies game is five reel x three row pokies title, featuring 15 non-fixed pay lines and available to play for real Australian dollars across desktop, laptop, mobile and tablet devices. There is an auto-play feature in the bottom right corner of the game, where you can set the reels to spin automatically for a chosen amount of spins (10, 20, 30, 40 or 50), at the desired cash amount per spin. You can also choose to auto-stop the feature after any win, if free spins are won, if the bonus game is won, if a single wins exceeds a certain amount or if your balance increases or decreases by a specified amount.

The gaming information is as follows: 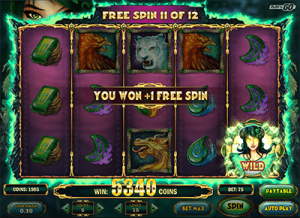 The Jade Magician bonus features all tie in with each other, allowing for some significantly large pay outs and the chance to re-trigger features.

Where to play Jade Magician for real money?

Enjoy Play’n Go’s Jade Magician video slot game for real money or practice play mode, at any of the recommended online and mobile optimised casino sites listed in our casino table above. Each of these Internet casino sites are licensed by the appropriate gaming governing bodies (such as the U.K. Gambling Commission, Curacao eGaming and the Malta Gaming Authority) and are regulated by independent gaming testing agencies that focus on player protection, fair gaming, responsible operator conduct and game payout validation (such as eCOGRA, iTechLabs and bmmTestLabs).

You can make secure real money deposits and withdrawals via any of the several globally trusted banking methods at the recommended online and mobile casino sites. Popular methods include:

All of your financial transactions are protected with the latest secure socket layer (SSL) digital encryption technology and no personal data is ever shared with any third party companies. Players can choose to remove their information from the casino’s database at any time the wish.

Play’n Go has produced another captivating video pokies title that offers a collection of high paying and distinct bonus features, including a free spins round, a wild multiplier and a second chance bonus feature that we have not seen before. While the game does remain relatively simple, it draws you in with its magical allure and its glamorous animations. We rate it 3.5/5.