While Jurassic Park needed no help in terms of popularity, the 2015 release of Jurassic World definitely gave it a boost, and as such Microgaming’s slot has become one of the most played pokies games in their huge catalogue.

Based on the first Jurassic Park film, released in 1993, directed by Steven Spielberg and starring Sam Neill, Laura Dern, Jeff Goldblum, Richard Attenborough, and Samuel L. Jackson, it follows two palaeontologists Alan Grant (Neill) and Ellie Sattler (Dern), and a mathematician Ian Malcolm (Goldblum) who tour a theme park of dinosaurs that have been created from DNA. Despite being told the park is safe by the owner John Hammond (Attenborough), the dinosaurs break free and hunt them.

It has been a cult classic, but it wasn’t until 2014 that Microgaming teamed up with Universal Partnerships and released the slot on their download, flash and Quickfire platforms where we are greeted with all the original characters and dinosaurs.

How to play Jurassic Park

Microgaming have included the popular 243 ways to win over 5 reels with stunning 3D graphics and incredible audio to give you a real money Jurassic Park experience. 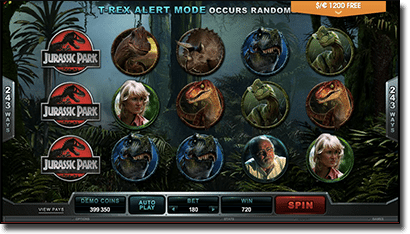 The audio sounds like it came straight off a movie soundtrack and isn’t too overpowering, though you can mute it, or just the background noises in the settings. You can also enable Quick Spin here too, and even change the quality of the graphics to basic if you don’t have a high data Internet plan.

Microgaming have chosen to really stick to the theme and instead of the traditional symbols, such as the 9, 10, J, Q, K, and A symbols, for the lower value symbols they have used the dinosaurs for the lowest value and the characters from the movie for the middle value symbols.

There is one main bonus feature, which occurs during the base game, called the T-Rex Alert Mode and the Free Spins feature that has an array of mini bonus features attached.

Where to play Jurassic Park

Our favourite place to play Microgaming’s Jurassic Park is at www.RoyalVegasCasino.com, thanks to the massive $1200 matched deposit welcome bonus, with wagering requirements that can be completed by playing this slot. To take advantage of several player bonuses and an exclusive sign-up promotion, simply click the button on this page on your desktop or mobile device.

Overall, Jurasssic Park pokies is graphically stunning and incredibly smooth, and has a lot of exciting features.

We triggered the T-Rex Alert mode almost immediately and earned extra Wilds for six spins, at our expense though, but managed to trigger it three more times.

The Free Spins on the other hand took us quite some time to activate but the regular and high wins kept our account balanced so we could play until we triggered them to see what the bonus features offered.

When we did it was well worth the wait and topped our balance up nicely. Additionally, if you somehow spin at least three Scatter symbols 25 times you will get to choose which bonus to add onto your free spins, though it was tough enough activating it once – but you might have more luck.