In Japanese, the term Kawaii means cute. In recent years, ‘Kawaii’ items have become a prominent aspect of Japanese popular culture, encompassing items such as clothing, food, entertainment and toys. The online video slot Kawaii Kitty plays on this trend, offering an adorable game which also shares the thrill and excitement of winning big. We have reviewed the Kawaii Kitty game in full

How to play Kawaii Kitty 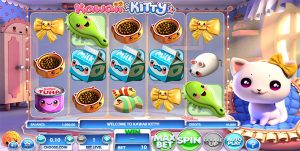 Produced by Betsoft, Kawaii Kitty is a five-reel video pokies machine boasting 10 pay-lines. While it does not have a scatter feature, it still comes packed with lots of hidden extras including pay both ways and expanding wild symbols. There is also a betting range to suit every player, with wagers starting at 20c per spin right through to $100 – ensuring hobby enthusiasts are catered for in addition to high-stakes gamblers.

Because it pays both ways, Kawaii Kitty enables you to claim a payout when the symbols are arranged to form a pay-line, regardless of whether the symbols start in column one or kennel five. The highest paying symbol on the reels is the milk carton which pays 50, 200 or 250 coins when you land three, four or five of that symbol, respectively.

Kawaii Kitty has a unique theme, enhanced by it’s impressive 3D graphics and visually stimulating animations. The Kawaii Kitty online slot game features smooth gameplay, with its seamless features captivating the player in an almost relaxing manner. Adding to this, the soft music also adds to the ‘cute’ feel of the game which is great for those after a subtler playing experience.

The theme of the pokie centres around a cute Kitty, with the symbols on the reels reflecting all sorts of adorable cat accessories such as bow ties, milk, kitty food, kitty brush and kitty toys. In order to land a winning combination, players must spin at least three icons of the same kind. 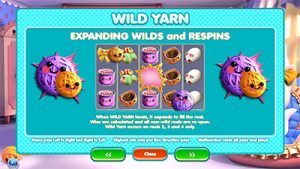 The main special feature to watch out for is the yarn symbol which is wild and expands to cover the entire reel once it is spun. It appears on reels two, three and four, with the expansion feature increasing your chances of landing a winning combination, with the yarn substituting for all other symbols.

After the wild has expanded, the game will launch into the Wild Re-spin mode in which the expanded wild symbol remains in the same place. There is also the exciting Double Up feature, which offsets the absence of the traditional free spins feature which most pokies have.

The Double Up mode allows you to double your recent winnings by staking half or all of the regular win. This is done through a heads or tails game.

Where to play Kawaii Kitty

Top-rated online casino Slots Million has a wide selection of more than 1,800 online pokies games, including Kawaii Kitty and the entire 3D animated pokies catalogue of BetSoft. You can be sure your playing in a safe environment at Slots Million which features the highest standards of encryption software aimed at keeping your personal details private and secure at all times. Additionally, new players at Slots Million are welcomed generously, with a $100 matched-bet deposit bonus to help you get started on your winning way.

There are also several other leading casino sites that host BetSoft games, just refer to our casino table at the top of this page to sign up directly or read our detailed reviews.

While we wouldn’t say it is the most exhilarating online pokies title we have played, there is something special about Kawaii Kitty which definitely makes it worth a flutter. With its pristine 3D graphics and wild feature, you get the opportunity to win big for as little as 20c per spin.