Microgaming must have found themselves watching one too many cat videos when conceptualising and creating Kitty Cabana, an online video slot based on a hotel for cats. While they are animated cats you will still get your daily feline fix, and what’s more is you can win up to $550,000.

How to play Kitty Cabana

Kitty Cabana is a five-reel, fixed 25-payline video slot. The betting range is quite large and players are awarded quite regularly. It appears to be set just outside the luxury hotel these cats are staying at, with windows and trees featuring as the backdrop.

There is quite a chatty ambience, but the sounds appear to ring true to a classic slot machine rather than tie in with the theme – though we’re sure meowing would probably get annoying. 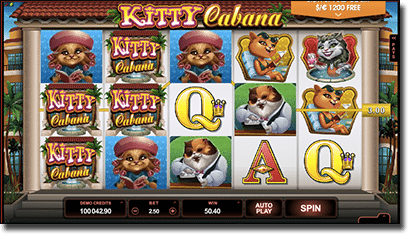 There are five cute, but comical as they’re doing human things (holding a martini, reading a book, etc), cat characters that represent the middle values. The highest payout available by spinning five of the cats in the spas (highest middle paying symbol) is $3375, but you need to be playing a maximum bet of $187.50 per spin. 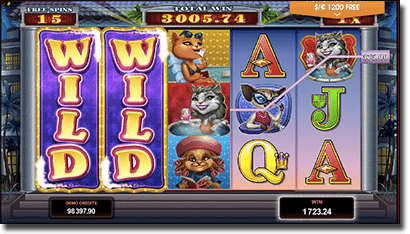 The lower value symbols are the A, K, Q, and J symbols that Microgaming often includes, but what you really need to keep an eye out for is the Wild and Scatter symbols.

Wild symbol: There are a few Wild symbols in this game due to the number of bonus features included, however the main Wild in the base game is the slot’s logo. This appears stacked and substitutes for every symbol except for the Scatter.

There are two bonus features involved in this slot, with one occurring in the base game while the other has to be activated.

Main feature: The main feature of Kitty Cabana is triggered by at least three Scatter symbols and this will then transform the reels into three floors of five doors. Players are required to pick one door on every floor as follows:

Dashing Wilds: There is also the inclusion of the Dashing Wild bonus in the base game. This is triggered at random and will see three Wild symbols (these only feature the Wild text and are different from the main Wild symbol) appear and land randomly on the reels to create the chance of a bigger win.

Our thoughts on Kitty Cabana pokies

This slot offers a unique take on the standard Free Spins feature which is definitely a drawcard. While it took us a little while to trigger the main bonus feature, the slot regularly paid out so we weren’t yearning for it.

Once we did trigger the feature, with just three Scatters, we were welcomed by a cat dressed up as a bartender who took us to the hotel and prompted us to open the first door, which was the type of Wild that would be applied – we scored an Expanding Wild feature. We then opened the second door, scoring a 1x multiplier – a bit of a let down – and then another door landing us eight free spins.

Unexpectedly, we also received an extra bonus and we were able to pick another door, where we scored 10 more free spins. So we ended up with 18 free spins with an Expanding Wild and a 1x multiplier applied. This is quite generous considering many slots just offer a large amount of free spins, but only by triggering five Scatters, not three.

Overall, Kitty Cabana is both a cat’s and a player’s dream and worth playing even if you aren’t a cat person – though Microgaming did bring out a canine version too called Hound Hotel that might be more your speed.