2 by 2 Gaming isn’t one of the well known, heavy hitters when it comes to online pokie production companies. But they have been quietly toiling away, pumping out some quality titles over the years. Their newest title, Legends of Africa, has been released to play at SlotsMillion.com.

How to play Legends of Africa pokies

Legends of Africa is a five reel, 30 payline pokie, but the playing screen is set up a little differently to your conventional online slot. The reels are set up with reel one displaying two symbols, reel three showing three symbols, reel three showing five symbols, reel four showing three symbols and reel five showing two symbols. This set up can be a little confusing with a set payline pokie as opposed to a 243 ways style pokie, because some of the paylines you would expect to win don’t.

The background graphics show a scene of the African Serengeti with birds flying away in the distance. Oddly though, the background music strikes me as more Caribbean than African. I don’t know if that’s just me or not.

With a minimum bet of $0.30 and a max bet of $120, Legends of Africa does pander to every type of punter out there which is always a big tick in my book. 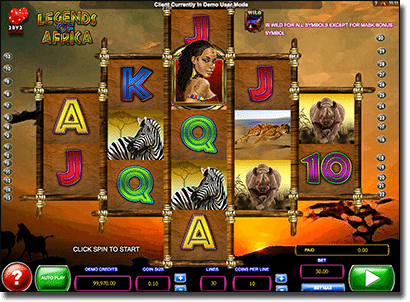 In descending order of value the symbols are: 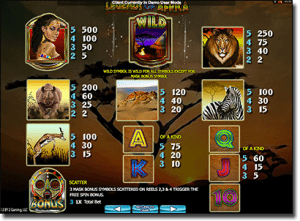 The wild hut symbol substitutes for all symbols except the scattered tribal mask symbol.

Any three scattered tribal mask symbols on reels two, three and four triggers the mask picking bonus feature. Once triggered you are given the chance to choose from one of three hidden options. The possible feature results are:

Each of these features packs the potential for some major wins, so choose wisely.

A sneaky little bonus in Legends of Africa is the Any Way Blast. This is applicable during any paid game. Whenever the same stacked symbol appears on reels one and five, the Any Way Blast is triggered.

All symbols the same as those that triggered the Any Way Blast are paid “any way”, which means they don’t have to be on an active payline to be counted toward a win.

All in all, Legends of Africa is an average game. It doesn’t blow you away with any completely new innovations, themes or graphics. The symbols and background graphics are nothing original and could be easily confused with the African themed game of any other online pokie production company.

I find the staggered playing screen a little odd with set paylines. Outside of this, I still maintain the background music is more Caribbean than it is African, too. In the end, Legends of Africa ticks all the boxes it needs to tick without blowing you away and keep you coming back for more.